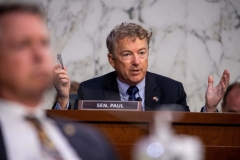 (CNSNews.com) – Sen. Rand Paul (R-Ky.) told “Axios” on Sunday that he wants Dr. Anthony Fauci, director of the National Institute of Allergy and Infectious Diseases (NIAID), fired after the National Institutes of Health (NIH) admitted in a letter to Congress that it funded gain-of-function research in Wuhan, China.

“And so in the letter they acknowledge that, yes, the viruses did gain in function. They became more dangerous. So they've created a virus. It doesn't exist in nature. It's become more dangerous. That is gain of function,” he said.

“Now, they try to justify it by saying, ‘Well, it was an unexpected result.’ I'm not sure I buy that. Think about it. You take an unknown virus, you combine it with another virus, and you get a super virus. You have no idea whether it gains functions or loses function,” Paul said.

“That's what the experiment is, but I don't know how anybody could argue that that's not gain-of-function research,” the senator said.

When asked if he wants President Joe Biden to fire Dr. Fauci, Paul said, “Absolutely. The thing is, is just for lack of judgment, if nothing else. You know, he's probably never going to admit that he lied. He's gonna continue to dissemble, and try to work around the truth, and massage the truth.”

Axios co-founder Mike Allen said, “Let me go out on a limb. President Biden is not gonna fire Dr. Fauci. So what can Congress do, or what are you gonna try to do?”

“We're calling for an investigation and -- and hearings on this. We've been calling for that for months, but you're right. There's been a great deal of resistance on the Democrat side, but, would we not want to know the origin of the virus and to know if it came from a lab, particularly since this research still goes on?” the senator said.

On Monday, Paul tweeted: “Dr. Fauci never loses! (At least according to his left wing media buds). Fauci’s latest ‘win’  involves the NIH eliminating ‘gain-of-function’ definition from their website,” and the senator tweeted a Town Hall article with the headline, “NIH Quietly Edits Section of Website on Gain-of-Function Research.”

The senator also tweeted, “Dr. Fauci now maintains experiments are only ‘gain-of-function’ if experimenters knew in advance that the newly created virus would gain lethality.”

“Hmm…So you can take any unknown bat virus and recombine it with the back bone of a known coronavirus and it doesn’t qualify as gain of function, even if you discover that it gains function?   Clear as mud and just as slimy,” he tweeted.