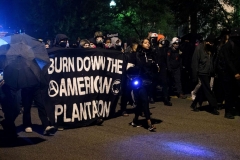 Antifa and Black Lives Matter demonstrators protest on election night near the White House in Washington, D.C. on November 3, 2020. (Photo by NICHOLAS KAMM/AFP via Getty Images)

(CNSNews.com) - Sen. Mike Lee (R-Utah) said Tuesday that the only violence he’s aware of was committed by Antifa in response to the peaceful pro-Trump rally last weekend in Washington, D.C., despite concerns about Trump supporters – some of them armed – who gathered outside election offices after President Donald Trump claimed the presidency was being stolen from him.

“I would like to note that as far as the president's arguments about the election and how they turned out inciting violence, I would like to point out here that the only violence I'm aware of has occurred in connection with Antifa, Antifa’s response to pro-Trump peaceful rally attenders. So I don't quite understand that,” Lee said during a Senate Judiciary Committee hearing titled: Breaking the News: Censorship, Suppression and the 2020 Election.

FEINSTEIN: After President Trump falsely claimed that the election was being stolen, a group called Stop the Steal was started on Facebook. It grew to more than 300,000 users in less than a day making it one of the fastest growing groups, I understand, in Facebook history,” Feinstein said. You shut the group down, but substantial damage already had been done.
Trump supporters, some of them armed with assault weapons, held Stop the Steal rallies outside election offices. In Philadelphia, two armed supporters who had traveled from Virginia were arrested on their way to the city's vote counting center.

Here is the question. This is a tough one. What are your concerns about the spread of misinformation, no matter how innocent it is, or it is not innocent, like Trump's claims about the election, that they may incite violence?

ZUCKERBERG: Senator, I'm very worried about this especially any misinformation or content that could incite violence, and during such a volatile period like this, one of our top priorities is making sure that people don't use our platform to organize any violence or civil unrest, and that was the basis under which we took that group, because there were a number of members who were posting potentially violent or encouraging violent comments that violated our policies.

We also have broader policies in place around trying to slow the spread of misinformation more broadly, even when it is not going to lead to some kind of violence or imminent harm, and that's why we've created this independent fact-checking program where we work with more than 80 partners around the world to help do fact-checking because people in our community have told us they don't want to see misinformation, but they don't want us to be deciding what is true and false.

So we have taken the step of building this program, which I believe is more sophisticated than what anyone else in our industry has. I'm very focused on these issues.

FEINSTEIN: I'm happy to hear that because I'm really struck by it that people armed with assault weapons as a product of a tweet could rally outside an election office, and I think it is really a serious issue that needs to be considered, and there need to be, once you signal that and people respond to it, it has to be in some way abated or some way pointed out or restructured on the internet itself.