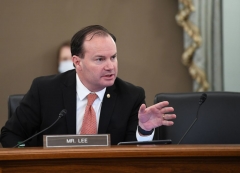 (CNSNews.com) - Sen. Mike Lee (R-Utah) said Friday that people should have faith in each other but be skeptical of government, because faith in government is tyranny.

Speaking at the Conservative Political Action Conference (CPAC), Lee said that the left hates the Bill of Rights,”because it talks about things that the government can't do, and that to them is like blasphemy.”

“That’s the absolute worst, because they want to use government,” the senator said, adding that “a disproportionate share” of the problems the country faces comes from the government.

Lee said that skepticism in government and faith in people work against each other.

“Government is not some holy thing. It’s not some noble aspiration, it’s nothing more, nothing less than the official collective use of force. It’s just coercive force. So faith in government means tyranny. You can't have faith in government without promoting tyranny, and faith in people means freedom,” he said.

“That, you see, is the absolute key to our founding and to our Bill of Rights, and it also happens to be precisely what the left is trying to undo. I also don't need to tell you that our fundamental freedoms are coming under attack more and more each and every day. In fact, in many ways, their sole agenda is putting more faith in government, and as a result they take steps inevitably to make us less free,” Lee said.

“Anything that puts faith in government is wrong and lends towards tyranny. So how do they do this? Well, they do it by eroding the very same protections in the Bill of Rights that make us free,” the senator said.

“You see, the founding fathers knew from sad, difficult, tragic experience under British tyranny that bad things happen when we allow too much power to accumulate in the hands of the few and in the hands of people who are not skeptical of government and in fact put their trust in it,” Lee said.

“You see, this is part of how British tyranny became so bad in the first place. People put an almost religious amount of zeal and support and yes faith in the crown and therefore in government. That's not where it belongs. We know better as conservatives,” he said.

"So when human beings -- any human beings, we wield that much power with no controls around it, that inevitably leads to tears and worse. People do bad things with that power. They restrict people's speech," the senator said.

"They restrict their ability to preach and live according to their religious beliefs and to petition the government seeking relief from the abusive action taken by that very government. They disarm the populous. They unreasonably search and seize individuals at their homes, invading their personal privacy and seizing their personal effects without a warrant.," he said.

"This has happened in societies over and over and over again and the one common ingredient, people put faith in the government and don't trust the people. So as a society, as a people, as a country, we made a choice with the bill of rights, a choice to prevent that kind of tyranny and protect the freedoms we hold most dear as only we the people can," the senator said.

The right to peacefully assemble in the First Amendment of the Bill of Rights is the least celebrated, but it’s what all the other freedoms draw their strength from, Lee said.

It has long been said, as I'm sure you’ll hear today, whether by accident or by divine design, our first freedoms are found in the First Amendment - our freedoms of speech, religion, press, assembly, and petition, and perhaps the one that's least known, least appreciated, least celebrated but from which all others draw their strength and ultimately depend in one way or another is our right to assembly, to do what we're doing right here today.

Freedom of religion depends on it. Core political speech is downstream from it. The right to petition government is bound to it and the freedom of the press pre-supposes it. We can't do any of these things without the freedom to assemble, and it’s one of the main freedoms not coincidentally that has been severely restricted with the growth of government that has occurred during this global pandemic.

We've been prevented from gathering in our churches, schools, workplace, in some cases even from gathering in protest while seeking redress of our grievances. Whether knowingly or not, those in power have struck at the core piece that has the ability to cause the whole structure to collapse, and we're suffering the consequences. Just look at California. Sad, sad California.