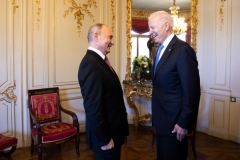 (CNSNews.com) – President Joe Biden proved Wednesday after meeting with Russian President Vladimir Putin that he doesn’t know what really motivates Putin, and it’s not the possibility of the world having a bad opinion of him, Sen. Lindsey Graham (R-S.C.) said on Wednesday.

Graham told “Fox News Primetime” that he thought Biden’s meeting with Putin was “a disaster.”

“My take away is that Biden has no idea who Putin is. He was asked on three different occasions about what he said to Putin regarding one our election interference. He told Putin if you’re seen as interfering in our election, it will hurt your credibility and people in the world will have a bad opinion of you,” the senator said.

“Do you know what President Biden? Putin could give a damn about what people think about him. They -- he wants people to believe, if you don't do what I say or you screw with me, I will screw with your election. They ask about Navalny, the dissident who is hanging by a thread in some Russian jail.  Biden's response was if this guy dies on your watch, it will hurt your standing in the world. It will hurt your credibility,” Graham said.

“You know what? You know what? Putin is complimented when you call him a killer. How do you stay in power for 20 years in Russia? The Duma, which is their Parliament is a joke. Name one time the Supreme Court of Russia has stopped Putin from doing anything he wanted to do. Name one time the Duma stood up to Putin. So, the entire democracy is collapsed in Russia,” he said.

“Here's what Biden doesn't understand. Putin could give a damn of what you think about him. The only thing he’s going to respond to is when you threaten his power, and I saw nothing coming out of the summit threatening Putin's power,” the senator added.

Biden told reporters in Geneva, Switzerland on Wednesday after his meeting with Putin that he gave the Russian leader a list of “16 specific entities … defined as critical infrastructure under U.S. policy” that should be off limits to a cyberattack.

Graham joked that Fox News was probably not on the list.

“The bottom line here this whole thing is absurd. I’ve got 16 parts of my economy that I consider to be no go zones. Well, what about the rest of America's economy? So this thing was a disaster, and to top it off, he was asked about China and about why they won't cooperate in terms of the coronavirus investigation. Did it come out of the lab or not?” the senator said.

“You can't shame these people. You have to stand up to them and hit them where it hurts, and in Putin's case, let's let the entire world know how much he’s enriched himself at the expense of the Russian people. It's there to be shown,” Graham added.