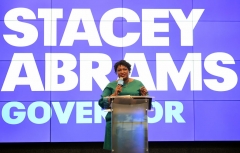 Stacey Abrams attends a celebration of women for Abrams at The Gathering Spot on September 22, 2018 in Atlanta, Georgia. (Photo by Prince Williams/WireImage)

When asked in an interview with NBC’s “Meet the Press” whether there’s any doubt who won the presidential election, Alexander said it should be after Monday.

“I mean, the states have counted, certified their votes. The courts have resolved the disputes. It looks very much like the electors will vote for Joe Biden. and when they do, I hope that he puts the country first -- I mean, the president -- that he takes pride in his considerable accomplishments, that he congratulates the president-elect, and he helps him get off to a good start, especially in the middle of this pandemic. We need to not lose one day in the transition in getting the vaccine out to everybody who needs it,” he said.

NBC’s Chuck Todd noted that it’s been 37 days since the election, 33 days since it was called, and six days since we know that enough pledged electors have been certified for the election. “And yet, on Wednesday, the president of the United States tweeted ‘#overturn.’ Is it about time for this to stop?” he asked.

“Well, Monday it should stop. I mean, remember, it's not unprecedented to contest an election. Al Gore took 37 days, I believe, to contest before he finally conceded, and then he made the best speech of his life respecting the result, which is what I hope the president will do if the electors vote for Joe Biden on Monday, which it is apparent they will,” Alexander said.

Todd said he didn’t understand the context in comparing it to Gore.

“That was an incredibly close election. The only reason there's a perception that this was closer than some others is the order with which we counted the vote. So is the comparison to 2000 really fair? Or is it creating a false straw man?” he asked.

“Well, it’s not -- you're exactly right. It's not the same circumstance, but what is a good comparison is that Al Gore conceded, then un-conceded. Then, after 37 days, he conceded again. but the important thing was he made the best speech of his life. He went on television. He said, ‘the courts have decided. I respect the result. Let's put the country first.’ That's what I hope the president will do if, as expected, on Monday, the electors vote for Joe Biden,” Alexander said.

“Everything before Monday is really a projection. We've gotten used to the media deciding shortly, you know, on election night. My first race for governor, I conceded within two hours, but the votes hadn't all been counted. I think it's fair to allow candidates to contest elections if they want to, if they have evidence, but when it's over, it needs to be over,” he said.

“I don't remember these same comments four years ago, on Hillary Clinton should get more time and all of this stuff. I mean, do you see why it looks like a double standard?” Todd asked.

Todd said he wasn’t there to talk about Stacey Abrams, but he admitted “that is something that she deserves to be asked.”

“But the question I have is, this is how the Republican Party seems to define itself in the Trump era, which is anything the president does that is unseemly, breaks a norm, instead of criticizing him, you, just now, you just say, ‘Well, what about?’ It's whataboutism. ‘What about this?’ That doesn't dismiss the president's behavior, does it?” he asked.

“But I would think if you're going to talk about Donald Trump all the time, you might mention Stacey Abrams once. I mean, after all, Georgia is where the Senate races are,” Alexander said. “Why aren't you? I have consistently said that if the president loses, and it appears that he will when the electors vote, he should put the country first, take pride in his accomplishments, congratulate Joe Biden and help him off to a good start, especially because of the vaccine.

“I think that's a very proper way to think about that, and it respects the processes we have. In fact, that should help increase the validity of the election if all of those who think that it's not valid see that states have counted, recounted their votes, that the courts have resolved the disputes, that the electors have all voted. It's very hard to say that Joe Biden's not validly elected after Monday, if all that happens,” he said.

“Here's the thing. Are you aware of all of these threats against election officials? Sort of, some of them are -- you've probably seen the comments by the gentleman from Georgia, a Republican official who said these threats of physical harm have to stop? The secretary of state in Michigan had people outside her house. Do you not hold the president responsible for creating -- for sort of creating the conditions that's encouraging this behavior?” Todd asked.

“Chuck, I've said what I have to say about this. I think to threaten election officials is a deplorable thing to do. I think the most important thing for our country, as George Washington said when it was founded, is not the first election, but the second election, the orderly transfer of power,” Alexander said.

“I think anything that detracts from that is not good for our democracy, and people can make their own judgment about whether the president's acting appropriately or not. I think he has a right to take his legal cases. I don't think his lawyers have a right to go to court with specious lawsuits with no evidence, and I think the processes say it's over on Monday if the electors vote for Joe Biden, which I expect that they will,” the senator said.