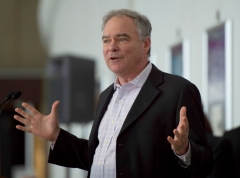 “I think this will be the biggest pro-child bill that will have been done in the history of this country, will be to children what Social Security was to seniors. So, I'm confident about that, even if some pieces of it are still being negotiated,” he said.

When asked what happened to Democrats in the Virginia gubernatorial race, Kaine said, ”Well, first, it was a Republican win, a close win, two points, and I got to give it to the Republicans. After being shut out for 12 years in every presidential, federal and state race, they were hungry.

“That's what happens when a party loses. They get hungry, and then they win a close race, but here's what I think really, really was tough, and I mentioned this earlier. I think congressional Dems just blew the timing of the infrastructure and workforce and education bills,” the senator said.

“Bluntly, we blew it, and I'm not talking about progressives or moderates or the House or the Senate. The congressional Democrats have majorities in both houses, and the American public expects us to deliver. We delivered big in March, but that was eight months ago,” he said.

“If we had done both of these bills in early October, Terry McAuliffe would have had so much to sell: Relief is coming in terms of lowering childcare costs, prekindergarten. There's going to be infrastructure to hire people to fix our port and our airports and improve our roads,” Kaine said.

“Instead, with a narrow majority, a lot of people start to think, let's see. I can hold out for the one thing I most want, or I can hold out to kick out this one thing I don't like, and Democrats blew the timing, and, as you know, Margaret, politics -- in politics, timing is important. We'll get the bills done, but we're going to get them done weeks after the election. We should have gotten them done weeks before the election,” he said.

When asked whether Biden is a drag on the party, Kaine said, “Well, look, if a president can get two legislative houses of his own party to deliver, the president suddenly becomes pretty popular, and I know the president and the White House has been frustrated with this as well.

“Here's my prediction, Margaret. You're going to see the infrastructure bill. It's on its way to the president's desk. He'll sign it. I hope he does a bipartisan signing ceremony. You're going to see us get this education and workforce bill to his desk, and then what people will be saying about Joe Biden is, he had probably the most consequential first year of anybody who's been president in recent times,” he said.

“Last week, the elections on Tuesday weren't good, but you also had a record job report, vaccines available for children, infrastructure bill going to the president's desk. We think a foundation is being laid to really move us ahead for President Biden and the American people,” the senator said.

“Again, I'm just -- I just regret that, even though Senator Warner and I were telling our colleagues, guys, don't be the dithering and delaying party, be the doer party, folks didn't wake up to it. They're waking up to it now,” Kaine said.