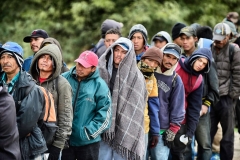 Migrants wait to receive food donated by people from the Community Center for Migrant Assistance in the community of Caborca in Sonora state, Mexico, on January 13, 2017. Hundreds of Central American and Mexican migrants attempt to cross the US border daily. (Photo by ALFREDO ESTRELLA/AFP via Getty Images)

(CNSNews.com) – By signing the latest round of executive orders on immigration, President Joe Biden’s “has decided to adhere to the edicts” of Rep. Alexandria Ocasio-Cortez (D-N.Y.), “who worships at the altar of open borders, Sen. John Kennedy (R-La.) told “Fox News Primetime” on Tuesday.

“I don't understand why the issue is perceived to be so complicated. To me, it’s pretty simple. Americans overwhelmingly support legal immigration. That's why our country invites over a million of our world’s neighbors every year to become American citizens. That's more than any other country on the planet,” the senator said.

“I'm flattered that people want to come to America. Other than North Korea, and North Koreans, when’s the last time you heard of somebody trying to sneak into China? They want to come here, but unless you have the IQ of a sloth, you know the difference between legal and illegal immigration. Illegal immigration is illegal. Duh. Vetting people at the border, as every country does, is not racist. It's prudent,” he said.

“It's how we enforce our immigration laws. I looked at President Biden's executive orders. I support his efforts to try to reunite kids with their parents. I mean, who wouldn't? But the rest of his executive orders don't seem to make a distinction between legal and illegal immigration,” Kennedy said.

“His executive orders are designed to roll back the efforts of the Trump administration, which did more in four years to stop illegal -- not legal -- but illegal immigration, than any other president in my lifetime, and I think -- I hate to say this, but I think President Biden has decided to adhere to the edicts of Congresswoman Ocasio-Cortez, who worships at the altar of open borders, and I think it's a big mistake, and I don't think the American people will support it,” he said.

On the issue of Biden’s executive orders on oil and gas, the senator called them “immeasurably foolish.”

“They’re going to gut Louisiana like a fish. One-third of my state's GDP is related to oil and gas, and our state is not alone. His war on oil and gas is going to hurt America. It’s going to destroy our energy independence,” Kennedy said.

“Here’s President Biden's new energy policy. We are not going to reduce our own oil. Instead, we’re going to buy oil from countries that hate us so they will have more money to buy weapons to try to kill us. It's immeasurably foolish. Most Americans support and all of the above energy policy - oil, gas, wind, solar, nuclear, geothermal, hydrogen, but they also understand that we can't run the greatest economy in all of human history without oil and gas - Not now, and not probably for a long time,” he said.

“I don't know about you, Trey, but my car does not run off fairy dust. My car doesn't run off unicorn urine, and I think once again, president Biden has given into the left-wing crazies, who say none of us except them care about the planet -- that's not true - and who, when they break a shoelace, they blame it on climate change. You know, they've taken a specific, discrete, scientific problem. Is our climate changing? How’s it changing? What’ll we do we do about it? And they turned it into a religion, and President Biden appears to be sucking it up like a Hoover Deluxe,” the senator said.

As CNSNews.com previously reported, Special Presidential Envoy for Climate John Kerry, who once served as secretary of state for the Obama administration, said that off oil and gas industry workers who are laid off because of Biden’s climate change initiatives should seek employment in the solar industry.

Kennedy said that Kerry is “living in La La Land.”

“I mean, you're going to tell a 50-year-old woman who’s been working for oil and gas company, who’s developed extraordinary expertise, who has kids in school, who has a mortgage to play, just to quit your job, because we are going to fire you, anyway, and go back to school, and then you can go work in a green job, but we haven't told you which one yet. I mean, you know, put down the ball. That's just not realistic,” the senator said.

On the issue of former President Donald Trump’s impeachment trial in the Senate, Kennedy said he’ll vote again to dismiss the proceedings like he did last week, and he explained why.

"Number two, we’re asking to impeach a president who’s no longer president. The constitutionality of that is dubious at best. So we are being asked to go through -- put the American people through this, and then later, we will find out if it is constitutional,” the senator added.