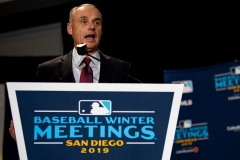 “I don't hate anybody, and I try to see grace wherever I can find it, but the decision by Mr. Rob Manfred, the commissioner of Major League Baseball, to turn baseball into a blue sport, it just really makes me want to heave. I mean, it's -- whether you agree or disagree with the Georgia law, I don't think any of us -- I know I don't -- want to have to think about politics when we watch baseball, and what disturbs me equally about Mr. Manfred's decision is he hasn't explained it,” he told Fox News’s “Faulkner Focus.”

“He hasn't explained why he thinks that Georgia's law, which I think was an honest effort toward election integrity, is racist. Now, Mr. Manfred, he looks like a smart guy. He went to Cornell, He graduated from Harvard law school. he probably washed his hands before it was cool. I think if he is going to do this to major league baseball, he owes an explanation,” Kennedy said.

“What I’d like to see him do is come on your show or one of your colleague's shows not just for three minutes but for 30 minutes. I think he needs to go to Amazon, buy a spine online and come on your show maybe with Governor Kemp and let Commissioner Manfred explain why millions of Americans who support election integrity are racist,” the senator said.

“And after he is done, I think President Biden needs to come on unscripted for 30 minutes. Now, the president has made a very serious accusation. He has said everybody who believes in having an ID, showing an ID before you vote is a racist. He said that everybody who is opposed to ballot harvesting -- and we've seen the treachery of that -- is a racist. Not an honest disagreement. You are a racist,” he said.

“I didn't like it when Vice President Harris called President Biden - then both candidates - a racist, because he didn't support school busing, and I don't like it now. I think the president and Mr. Manfred need to explain, not in a scripted way off of a teleprompter. They need to come on your show. Let them come on with Governor Kemp,” Kennedy said.

Kennedy questioned why requiring an ID to vote is racist when it’s required during other circumstances like buying a car or getting a job.

When asked to react to a Wall Street Journal op-ed that argues that Democrats are stuck in 1964 and should be stopped from “invoking the ghost of Jim Crow,” Kennedy said, “Look, America is not perfect, but we are good, and I think our history is the best indication of the fact that we are not a systemically racist country.

“I mean in 150 years, Harris, which is the blink of an eye in the scheme of life, death and the resurrection, we have gone from institutionalized slavery to an African-American president. We have African-Americans and other minorities serving at all levels, local government, state government, federal government, and I'm very proud of that, and that's why I take this accusation of being a racist very seriously that President Biden has made,” he said.

“As best I can tell, here’s what President Biden is upset about - voter ID laws and ballot harvesting. Now, here’s a question to President Biden. Given the prevalence of IDs throughout America, given the number of social circumstances in America like buying a car or getting a job that require an ID, why is requiring an ID to vote racist?” Kennedy asked.

“And one point of view -- I would like to hear President Biden's thoughts on it -- not requiring an ID is the preservation of the right to cheat. Why wouldn't you want to know if someone is who they say they are when they are trying to vote? Why is that racist? And President Biden and Commissioner Manfred need to explain this now. They can't get off this easy. They just called half of America racist,” the senator said.