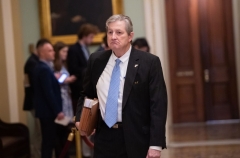 Senator John Kennedy, Republican of Louisiana, arrives for the Senate impeachment trial of US President Donald Trump at the US Capitol in Washington, DC, January 22, 2020. (Photo by SAUL LOEB/AFP via Getty Images)

(CNSNews.com) - Sen. John Kennedy (R-La.) pointed out the problem with Democratic gun control efforts is that they are not targeted, they are too broad, saying that “you don’t stop drunk drivers by getting rid of all sober drivers.”

Shooting massacres like the one at a Colorado grocery store on Monday are “terrible” and “horrible,” Kennedy told “Fox News Primetime” on Tuesday.

“America is a big country. We're free, and one of the prices we pay for that freedom is that you're always going to have some people who abuse it. Freedom is risk. What we have got to concentrate on is how to control that risk,” the senator said.

“You're not going to stop the killings until you stop the killers, but you don't stop drunk drivers by getting rid of all sober drivers, which is what many of my Democratic friends want to do with respect to the Second Amendment. In my judgment, we do not need more gun control. We need more idiot control,” he said.

“How do we do that? We’ve already tried. The Republicans have. Senator Grassley, Senator Cruz had a bill to strengthen our national database. We regulate gun ownership in America. If you are convicted of certain crimes, if you have a tendency to violence, if you’re mentally ill and you want to buy a gun, your name has to run through a database. The problem is that the database has huge holes in it, and many federal agencies and state agencies are very cavalier about sending in the names,” Kennedy said.

Sens. Ted Cruz (R-Texas) and Chuck Grassley (R-Iowa) introduced legislation two years ago - the “Protecting Communities and Preserving the Second Amendment Act of 2019,” which was filibustered in the Senate. The bill was aimed at improving the availability of records to the National Instant Criminal Background Check System (NICS), addressing mental illness in the criminal justice system, and ending straw purchases and trafficking of illegal firearms.

“Grassley and Cruz's bill, which I support, would have tightened up the database, and it would have cracked down on people who have guns who shouldn't have guns. You know why the bill didn't pass? Many of my Democratic colleagues filibustered it,” Kennedy said.

“Now, if you drill down far enough, what you're going to find -- I don't want to paint with too broad a brush, but many, not all, many of my Democratic colleagues just don't believe in the Second Amendment. They just don't,” the senator said.

“I mean, we’ve heard it in terms of police officers. I mean, basically the Democratic position is that if a bad guy shoots a cop, it's the gun's problem. If a cop shoots a bad guy, it's the cop's fault. You know, if it weren't for double standards here, we wouldn't have any standards at all,” he said.

“And if President Biden or whoever is making the decisions at the White House really want to do something about this problem, they will support Senator Grassley's and Senator Cruz's bill. Let me say it again, we already regulate guns in America. The database has holes in it big enough to drive a Mack truck through. Why wasn't the killer in Boulder's name in the database? Let's find out. Let's plug the holes and enforce the law,” he said.

“This is not just about databases and checks for guns and that sort of thing. This is about the Second Amendment. Many of my Democrat colleagues just don't support it,” Kennedy said.

“You know, when a jihadist who happens to be a Muslim, blows up a school full of school children and kills them all, we’re told don't judge all Muslims because of the acts of a few, and I agree with that. How come the same rule doesn't apply to the 100 million gun owners in America who never abuse their right?” he asked.

“We already regulate guns in America. We have the laws. We're just not enforcing them. We need to enforce them,” he said, adding that if Democrats would pass the Grassley-Cruz bill and Democrats wouldn’t “filibuster it to death, then we could do something about this problem.”