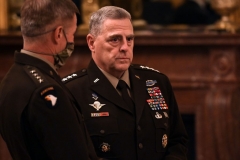 Chairman of the Joint Chiefs of Staff Gen. Mark Milley (C) attends the Medal of Honor ceremony to be awarded to US Army Sergeant Major Thomas Payne for conspicuous gallantry while serving in Iraq, in the East Room of the White House in Washington, DC on September 11, 2020. (Photo by ANDREW CABALLERO-REYNOLDS/AFP via Getty Images)

(CNSNews.com) - Sen. John Kennedy (R-La.) on Tuesday said that if the allegations against Joint Chiefs Chairman Gen. Mark Milley are true, that he told Chinese leaders that he would warn them first if then-President Donald Trump decided to attack the Communist country, the general should resign.

“I have been very disappointed in General Milley. I mean, we need a military leader. We need a chairman of the joint chiefs. Based on his behavior in the last year or two, we don't have a military leader. We got a politician,” Kennedy told “Fox News Primetime” when asked for a reaction to Sen. Marco Rubio’s (R-Fla.) call for Milley to step down.

According to a book by Washington Post reporters Bob Woodward and Robert Costa, Milley spoke with Chinese communist leaders, reportedly telling them: "You and I have known each other for now five years. If we’re going to attack, I’m going to call you ahead of time. It’s not going to be a surprise.”

Host Lawrence Jones asked Kennedy whether he believes that Milley was going against the commander-in-chief President Trump and going to the Chinese.

“Well, according to Bob Woodward in the book, yes, and we need to hold hearings and get to the bottom of that,” Kennedy said.

“So should he resign?” Jones said.

“My Democratic friends are going to probably sweep that under the rug, but I'm ready to hold hearings. I think General Milley has a lot of explaining to do, and I think he ought to stop bellowing and honking on like a goose about white rage and actually try to make our country more secure,” Kennedy said.

When pressed again about whether Milley should resign, Kennedy said, “Yes, yes, but these are all allegations, and this is still America. You give me about 15 minutes with General Milley under oath, in front of a committee of the United States Senate, and I’ll get to the truth.”

Jones pointed out that Milley will appear before Congress in two weeks.

“And if the truth is as alleged then, yes, he should resign,” Kennedy said.

“Well, maybe, maybe our teachers remember that vaccine that Vice President Harris said she would never take because it was developed during the Trump administration, except now she and her boss want to mandate that vaccine,” Kennedy said.

“Look, I support the vaccine. I have taken the vaccine. I think the vaccine works. Everyday I try to persuade my constituents to take the vaccine, but, this is America, and I don't believe that the president has the authority unilaterally in our Madisonian system of separation of powers and our federalist system to mandate, especially through OSHA a vaccine,” he said.

“But, Lawrence, we grapple with issues of how to balance personal freedom with public safety all the time. And the appropriate form to do that is not to have a president issue a mandate like a dictator. It's to allow our state and local legislatures to weigh in and decide how they strike the appropriate balance. I think the president is way out of line here, and I think it's going to be counter productive,” Kennedy added.

“That's coming from people that are pro-vaccine,” Jones said.

Jones also noted that Sen. Elizabeth Warren (D-Mass.) wrote a letter to Amazon demanding that the company ban books that be labeled as COVID misinformation.

When asked if banning books reminds him of anyone, Kennedy said, “It reminds me of the seventh century. I think -- I think that issue was settled back in 1791 when the American people adopted a Constitution and a First Amendment. Look, that's the typical neo socialist point of view. Some people equate neo socialism with liberalism, and to some extent it is, but some liberals believe in the free exchange of ideas. Neo socialism is really illiberalism, and neo socialism is for morons.”

“That they want to control the way their people think, and part of the way they do that is to ban books, and I can't imagine Amazon doing that, but if Amazon did do that, I can assure you there would be a number of us in Congress that would be raising fresh hell,” the senator said.