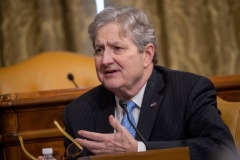 (CNSNews.com) - Sen. John Kennedy (D-La.) on Wednesday had some foreign policy advice for President Joe Biden: "don’t be a bully" and "don’t tolerate bullies," because "weakness invites the wolves."

I know what I want. I want a foreign policy that helps create an America in which people can continue to prosper and Americans can live their lives as they see fit and as a moral principle, I want that for every other country.

How do you achieve that? Two rules. Number one, don't be a bully, and number two, don't tolerate bullies. I'm talking about Iran and Russia and China. How do you achieve that? Weakness invites the wolves. The reason bullies fear us is because America is the strongest country militarily in all of human history. We’re also the wealthiest country in all of human history.

We need to maintain it. President Biden is undermining it. He's proposing massive tax increases, which will destroy wealth. He spent and is proposing to spend trillions of dollars that we don't have on things we don't need.

Number two. He’s proposing to cut the military. We need to be increasing our military spending. Number three, six months ago, Sean, we were on a glide path as a country to energy independence. President Biden stopped that for sure. Number four, he needs to tell his people to stop apologizing for America. We have nothing to apologize for.

We’re not perfect, but we are good. When his U.N. Ambassador in her first speech to every country in the world and at the U.N. In New York says that white supremacy is woven through the fabric of America's founding principles, that's not helpful. You mentioned Russia. Here’s what we need to do with Russia. President Biden told Putin to stop the cyberattacks.

The cyberattacks have continued. He needs to hit Putin with a serious cyber attack. Two wrongs don't make it right, but they do make it even. Number two, he needs to re -- he meaning president Biden needs to reimpose sanctions on the North Stream 2.

“Number one, he should negotiate and sign a trade agreement with Taiwan. Woah! That will get China's attention, and number two, he needs to publicly back Australia. Australia has tried to stand up to China. China is boycotting all Australian goods, and Australia sends a lot of its exports to China. We need to come to the aid of Australia, and we need to speak loudly and clearly and tell the European Union we expect their help,” the senator said.

Lastly, Kennedy said that the United States needs to “vaccinate the world.”

“You don't have to take the vaccine if you don't want it, but it's the right thing to do, and it will make friends all over the world, and every vial, every syringe needs to have ‘Made in the USA’ on it,” he said.