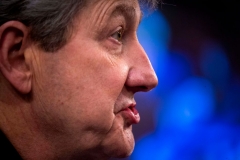 (CNSNews.com) - Sen. John Kennedy (R-La.) said Tuesday that the Democrats’ $3.5 trillion reconciliation bill is about making “every single decision for Americans about how to run their lives.”

Case in point, the Democrats’ plan to have the IRS track every single financial transaction of bank accounts with over $600 in it or that have $600 in transactions.

Kennedy told Fox News’s “Hannity” that he doesn’t believe the Democrats’ plan to add new IRS agents is about compliance.

As CNSNews.com previously reported, the Biden administration is proposing that Congress enact legislation to require that financial institutions annually report to the Internal Revenue Service what Treasury Secretary Janet Yellen describes as the “aggregate inflows into the account during the year and the aggregate outflows” for all accounts that are worth at least $600 or that engage in at least $600 worth of transactions.

“As one of my colleagues Senator Lummis says, whether you buy a couch or a cow, the IRS is going to know about it. I don't know about you, but it gives me the creepy vibes. If you want to learn more about it, I put a piece on my website at John Kennedy.com, but this is one more example why, at least in my state, President Biden is about as popular as a fever blister. They just don't understand this stuff,” he said.

Host Sean Hannity said, “I read they might have medicine for that. I don't know.”

“The medicine is to kill this bill, and Republicans aren't perfect, but there's so many members now, the other side, including President Biden, that are crazy. I mean, I've never seen anything like this,” Kennedy said.

“I think what we’re watching in terms of-- or seeing in terms of the disarray, President Biden has dug up more snakes than he can kill. He made all of these promises. He said, I'm a moderate. He's not. He's given into the woke left,” the senator said.

“And they are going, my God, these people do not trust me to make decisions for myself. They really think - Biden and the woke left - they really think that America can't survive unless Biden and the woke left make every single decision for Americans about how to run their lives. That’s what this bill is about. It's going to extend the federal government into every corner of every American's life and that is why the president's poll numbers are dropping, in my opinion,” Kennedy said.