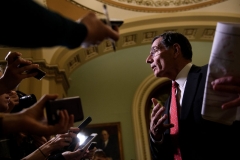 (CNSNews.com) – Despite Democrats’ threats to do otherwise, the late Justice Ruth Bader Ginsburg has spoken out against packing the court, saying it would politicize the high court, Sen. John Barrasso (R-Wyo.) said Tuesday.

“So what have we heard from Chuck Schumer? We’ve heard threats, threats to the institutions of our nation, and he says if you do this, he will do that. These threats have been going on for a long period of time. Remember in the spring when Chuck Schumer stood outside the Supreme Court, and he yelled at the building and yelled at Gorsuch and Kavanaugh and said, you will pay the price,” Barrasso said.

“Last year in an interview, she said don't do it. She said nine is the right number. She said to expand the court would politicize it and would not be the thing to do, but the Democrats aren’t going to listen to her,” the senator said.

“After President Trump makes his nomination, they’re going to go on a seek and destroy mission to undermine whoever the president nominates, however well qualified to undermine their credibility and their character,” he said.

"Nine seems to be a good number. It's been that way for a long time," she said, adding, "I think it was a bad idea when President Franklin Roosevelt tried to pack the court."

Meanwhile, the reason why Democratic presidential nominee Joe Biden refuses to say who his potential Supreme Court nominees would be is because no matter who he picks, he would upset his base, Barrasso said.

He noted that Biden also refused to answer whether he would expand the number of justices on the high court.

“He didn't really answer either, and the reason he didn’t answer who is on your short list is he knows if he answered any way, he would alienate at least half of his voters – either those loyal to the Bernie Sanders, Elizabeth Warren, Alexandria Ocasio-Cortez side of the ledger, or those who are not quite as extreme as they are, but either way, it was a loser question for Joe Biden,” the senator said.

"I’m not sure what he recalls of any of those, but I do know that the Democrats today here will continue to remember those lessons and use them against whoever it is that President Trump nominates,” the senator said.