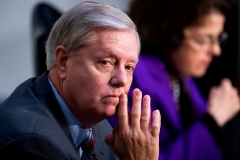 (CNSNews.com) - Sen. Lindsey Graham (R-S.C.) said he supports a total boycott of the 2022 Beijing Winter Olympics, and he pointed to President Biden’s handling of Afghanistan as the reason Russia is testing the U.S. on Ukraine.

“I think we should do everything we can do to marginalize the Olympics held in China because of the Chinese behavior. I like the Olympics as much as anybody else, but If you could go back in history and knowing what we know now, was it a good idea to allow the Olympics to be held in Berlin? Did it legitimize the Nazi regime? I think it did,” Graham told Fox News’ “America Reports.”

“If I could go back in time you know Jesse Owens would not be the star we know today, but If the world had stood up to Hitler and said to him, We're not going to won't come to your hometown and play with you while you are putting Jews in bad conditions and taking territory around you,” the senator said.

“So here’s what I think China needs to understand. If you want to be recognized by the world in a good fashion, then you have to do good, not bad. Quit destroying the agreement you made with Hong Kong. When the British left Hong Kong and turned it back over to China, there was an agreement to allow democracy to flourish in Hong Kong. They’ve broken that agreement,” he said.

“They have disputes with their neighbors like Vietnam and the Philippines and are using military force, the threat of it to make a territorial claim. They’re talking about invading a democracy called Taiwan that we stood behind for all these years. What’s at risk? If we don't stand up for Taiwan and the Ukraine, then we’re really not standing up for democracy,” Graham said.

“The Ukrainians gave up lethal weapons in the late '90s with the understanding that if they’d give up their nukes, the world would guarantee their territorial integrity. So what does it matter to you if Putin goes into the Ukraine? It sets in motion people taking property of others by a force of arms,” the senator said.

“What does it mean when a mob goes into a store and cleans the place out and nobody gets prosecuted? You can’t do business. You can’t walk down the streets when you lose control of public safety. The same is true in the international community. When you allow China to be rewarded by holding the Olympic Games in spite of their behavior, you will get more bad behavior,” he said.

When asked whether the Biden administration to call for a total boycott of the Olympics, which includes athletes too, Graham said, “Yes, I would encourage the world to not participate in the Beijing Olympics, not just the United States, because what you’re doing is you’re legitimizing a regime that’s destroying the rule of law as we know it, and literally has concentration camps for a religious minority.

“Do you really want to be on that side of history? Fifty years from now, when you look back at what you did, I think you would be well served not to legitimize this regime,” the senator said.

On the issue of Ukraine, when asked what he took away from Biden’s one-on-one with Russian President Vladimir Putin, Graham said, “I think the reason that these troops are on the border is they are testing Biden. I think after Afghanistan, he put in play, in motion, bad guys trying to test him at every turn. So what would I do if I were President Biden?

“I would tell Putin, it's not just me that will be upset. It's the Congress. Democrats and Republicans can work together. Democrats wanted to invade Russia when they said they were meddling in the election,” the senator said.

“They’re pretty quiet now when it comes to the invasion of Ukraine, but I do believe there’s wide bipartisan support to hit Russia hard, to annihilate their economy if they did invade the Ukraine, and if I were President Biden, I would enlist the congress to give him some juice he doesn't have today to let Putin know, it's just not me upset with you,” he said.

“So I’m going to work on a resolution laying out what Congress should do if there’s an invasion to let the Russians know, you’re just not dealing with Biden here, Pal, you’re dealing with the entire federal government,” Graham added.

On the issue of the record homicide rates that are plaguing 12 major U.S. cities, Graham said, “The people in charge of the cities have sent a signal to criminals that you can pretty well get away with it. When you condone lawless behavior, you get more of it. Can you imagine the Russians threatening Ukraine when Ronald Reagan was president or Donald Trump? The point I’m trying to make is that political leadership matters.

“We’re losing the streets in these major cities, ‘cause criminals no longer fear the law. The cops are more afraid of politicians than they are the criminal. The public is very frustrated. That’s why we’re doing well, but there’s one topic you haven’t mentioned that’s worse than all of these combined,” he said.

“Iran is on the verge of breaking out and acquiring a nuclear weapon. If the Iranian regime gets a nuclear weapon, all of the Arabs in the Middle East will want a nuclear weapon. We’ll have a nuclear arms race, and the survivability of Israel is at risk. So you need to add that to your list,” the senator said.

“Not only is it the Ukraine losing control of the streets, Taiwan, the Iranians are about to test Biden. They’re going to break out and get a bomb if we don’t do something about it, and it all goes back to weakness. When you’re weak in one area, you pay a price in every other area, and it started with Afghanistan,” Graham said.

When asked what his prediction is on the Republicans’ chances of regaining the House and the Senate in 2022 after RNC Chairman Ronna McDaniel predicted a red wave, Graham said, “A wipe out.”