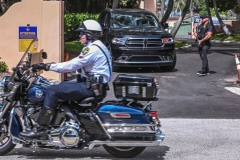 Secret Service and local law enforcement officers are seen in front of the home of former President Donald Trump at Mar-A-Lago in Palm Beach, Florida on August 9, 2022. (Photo by GIORGIO VIERA/AFP via Getty Images)

(CNSNews.com) – Sen. Lindsey Graham (R-S.C.) said Thursday that the “primary reason” why Attorney General Merrick Garland and the FBI “are being pushed to disclose” why the FBI raid on former President Trump’s home is because of “deep mistrust of the FBI and DOJ when it comes to all things Trump.”

As CNSNews.com reported, Garland said Thursday that he personally approved the raid and that the Justice Department filed a motion to make the warrant and property receipt public. However, the attorney general did not say why the raid was necessary.

“The primary reason the Attorney General and FBI are being pushed to disclose why the search was necessary is because of the deep mistrust of the FBI and DOJ when it comes to all things Trump - such as the Crossfire Hurricane and Mueller investigations,” Graham said in a statement.

“What I am looking for is the predicate for the search. Was the information provided to the judge sufficient and necessary to authorize a raid on the former president’s home within ninety days of the midterm election? I am urging, actually insisting, the DOJ and the FBI lay their cards on the table as to why this course of action was necessary. Until that is done the suspicion will continue to mount,” he said.

“After Crossfire Hurricane and the Mueller investigation, where FISA Court rebuked the FBI and DOJ for failing to disclose exculpatory material, there is no benefit of the doubt when it comes to investigating President Trump,” the senator said.

“Half the country believes that when it comes to President Trump there are no rules. They have lost faith in the system. The only way to address that problem is full disclosure of the facts and circumstances which led to this unprecedented action,” Graham said.