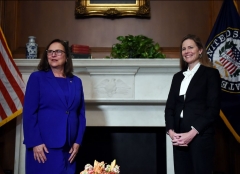 (CNSNews.com) - Sen. Deb Fischer (R-Neb.), who voted against raising the debt ceiling along with other Republicans, told Fox News’s “Special Report with Bret Baier” on Tuesday that the Democrats can raise the debt ceiling on their own just like they’re trying to pass the $3.5 trillion spending bill on their own.

Baier noted that Republicans authorized adding $7.8 trillion worth of debt during the Trump administration.

“You know, if you look at what happened in March, Bret, that was a complete Democrat exercise - that $1.9 trillion. We’ve seen it again right now. They're not reaching out in a bipartisan way. They are not reaching out to Republicans, even trying to work on some ideas here,” Fischer said.

“I heard you say earlier about the Democrats want to have a transformational change here in our country. They want to do that. They should do it on their own then, and they should pay bills. They should be honest about the cost that we're going to incur, that taxpayers are going to face, and this idea that it's free or this idea that nobody who makes under $400,000 is going to pay taxes,” she said.

“Look at what the stock market did today? People understand what's going on here? Nothing's free. Everybody is going to be taxed. You look at inflation going up. That's a tax on the middle class, and it is a tax on working Americans,” the senator said.

Baier said that both Republicans and Democrats “have been spending like drunken sailors for years.”

“You know, I’ve said that before, too, and then we get hit with COViD, and we worked together in a bipartisan way trying to address that, and we did spend $6 trillion, but I think Republicans are saying, you know, we didn't need to do that 1.9 trillion in March, because let's go back and see where that other money has been spent on and look at what is still available? And what programs worked? That's the difference you are seeing between the two parties here right now,” Fischer said.

Sen. Bernie Sanders (I-Vt.) told progressive House members that if they vote on the bipartisan infrastructure bill on Thursday, they’ll lose leverage, so he’s advising them not to vote on that first, Baier pointed out. Sanders wants to get the $3.5 trillion bill passed first.

“We don't know where the Democrats are on this. They’re going to have to figure that out themselves, but, the change horses in midstream is maybe -- maybe it's not unusual in Washington, but when you are told one thing and then you see leadership with Nancy Pelosi in the House trying to maneuver that fine line between her moderates and the progressive wing of the party, you know, we are just -- I'm just going to sit back and watch,” she said.