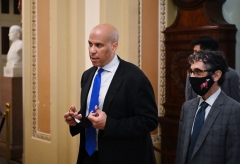 Senator Cory Booker, Democrat of New Jersey, walks to the Senate Chamber during the infrastructure vote at the US Capitol in Washington, DC, on August 10, 2021. (Photo by MANDEL NGAN/AFP via Getty Images)

(CNSNews.com) - Sen. Cory Booker (D-N.J.) said Sunday that the Congress has to continue to work on getting real transparency in policing in America, because “we don’t even know how many people have been killed at the hands of police in this country, because we don’t collect the data.”

“We have got to continue to work on getting real transparency in policing in America. We don't even know how many people have been killed at the hands of police in this country because we don't collect the data,” Booker told CNN’s “State of the Union.”

Booker said that there’s no database that collects information about police-involved shootings.

“So, we need to -- these are things that we need to require federally, require them to be done, and, of course, if you're going to get a federal grant, you're going to have to show some transparency in what you're doing. This is stuff that's not way out of the norm, what we were asking for,” the senator said.

Booker also pointed out that applications for state police in New Jersey are down considerably.

“I was surprised that we got leaders of law enforcement to say, absolutely, yes, because they understand that we are at an inflection point in America. We have in the state of New Jersey applications for the state police are down 90 percent,” he said.

Despite announcing in June that congressional negotiators had reached an agreement on police reform, talks fell apart last week, because as Sen. Tim Scott (R-S.C.) tells it, Democrats wanted to include language that would have defunded the police.

BOOKER: “Again, it's unfortunate. You remember, on this saga, we got the head of the FOP, the director of FOP, IACP -- these are some of the biggest unions and law enforcement agencies -- to go with us on a lot of common sense reforms, and those folks don't want to defund the police. This is a bill that would have had millions of dollars for police departments. So...

BOOKER: Additional dollars, because we want to help officers with mental health issues. We want to collect more data, so we should give more resources.

So it was a frustrating experience, in the sense that we had the biggest civil rights demonstrations in this country's history asking for change. We wanted to have more transparency, higher professional standards, and real accountability. If you break the law, you shouldn't be shielded from that. Those were the lines all along.

We sat down, good-faith negotiations, got closer together, got major law enforcement groups to endorse it, but we didn't get it done.

When asked whether he’s surprised that Booker is characterizing this as defunding the police, Booker said, “Well, the one area of the bill we agreed on was choke holds, and we conditioned funding -- federal funding on that.”

However, Booker said that he didn’t “want to descend into partisan lines.”

“There's a lot more at stake here, and a great example of this is, we wanted to memorialize what Donald Trump did,” Booker said.

“He passed an executive order that was -- actually had some good parts to it, like creating national accreditation standards that would have involved the FOP, and Donald Trump himself said, if you want federal dollars, you're going to have to comply with raising professional standards, but we couldn't even get agreement to memorialize what is already the law of the land via executive order,” he said.