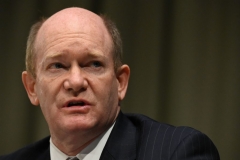 US Senator Chris Coons (D-DE) speaks during the Senate Judiciary Committee hearing titled "Examining Best Practices for Incarceration and Detention During COVID-19," in the Dirksen Building in Washington, DC on June 2, 2020. (Photo by ERIN SCOTT/POOL/AFP via Getty Images)

(CNSNews.com) – Sen. Chris Coons (D-Del.) said Wednesday that negotiating with President Donald Trump is difficult, and he likened it to “trying to nail Jello to the wall.”

In an interview with MSNBC’s “Morning Joe,” Coons said that Congress has been working for months on a coronavirus relief package to follow up on the CARES Act, “which delivered about $2.3 trillion worth of relief and is what's keeping our economy from collapsing.”

“Speaker Pelosi ultimately in the last few weeks has been negotiating directly with White House Chief of Staff Mark Meadows, with Treasury Secretary Mnuchin, with Senator Schumer, the minority leader in the Senate, and it's been very difficult to get to any agreement, even as Speaker Pelosi and Senator Schumer have agreed to come down by a trillion dollars from that initial House package,” Coons said.

“This is just another example of how difficult it is to negotiate with President Trump. It's like trying to nail Jell-O to the wall. He's canceling all negotiations and then within a few short hours saying, no, no, we urgently need more money to be enacted tomorrow.

“We are not in session this week because of the COVID outbreak that has infected three of my colleagues. Instead of doing what we should be doing, which is negotiating a final COVID relief package for the American people, the Senate majority and the judiciary committee are racing ahead with a Supreme Court confirmation.

Trump initially tweeted on Tuesday that he was calling on Republican members of Congress to end negotiations on another COVID relief bill until after the election and focus instead on confirming Supreme Court nominee Amy Coney Barrett, adding that when he wins, the stimulus bill will be passed.

“Nancy Pelosi is asking for $2.4 Trillion Dollars to bailout poorly run, high crime, Democrat States, money that is in no way related to COVID-19. We made a very generous offer of $1.6 Trillion Dollars and, as usual, she is not negotiating in good faith,” he tweeted.

“I am rejecting their request, and looking to the future of our Country. I have instructed my representatives to stop negotiating until after the election when, immediately after I win, we will pass a major Stimulus Bill that focuses on hardworking Americans and Small Business,” the president added.

"I have asked Mitch McConnell not to delay, but to instead focus full time on approving my outstanding nominee to the United States Supreme Court, Amy Coney Barrett. Our Economy is doing very well,” Trump tweeted.

“The Stock Market is at record levels, JOBS and unemployment also coming back in record numbers. We are leading the World in Economic Recovery, and THE BEST IS YET TO COME!” he added.

“If I am sent a Stand Alone Bill for Stimulus Checks ($1,200), they will go out to our great people IMMEDIATELY. I am ready to sign right now. Are you listening Nancy?” he tweeted.

When asked what he would say to small business owners whose business is about to go under without federal help, Coons said, “Well, that's literally a conversation I'm having every day as folks I know here are texting me, emailing me, calling my office, saying, when are you going to get this next relief package done? I'm on the Small Business Committee. I helped write some of the PPP provisions that helped millions of businesses and nonprofits stay open in the CARES Act.

“We still have the unresolved and critical issue of funding state and local governments which have already laid off more than a million and a half public employees. The middle of a pandemic is no time to have teachers and paramedics, nurses and police officers facing layoffs because of the ongoing recession caused by President Trump's bungled mishandling of the pandemic,” he said.

When asked if he thinks the standalone bill for stimulus checks could get money into the pockets of his constituents, Coons said, “It would distribute I think roughly $400 billion to the American people. I'll remind you, President Trump insisted on putting his name on it the last time, something in the distribution of federal support and relief in comparable recessions.

“That may be something that's considered today. Bluntly, Speaker Pelosi and Senator Schumer have tried their best to make progress in these negotiations, and the unpredictability of President Trump's response and the unwillingness of the Republican majority in the senate to focus on this pandemic relief package rather than the confirmation of Judge Barrett to the Supreme Court has made progress very difficult,” the congressman said.