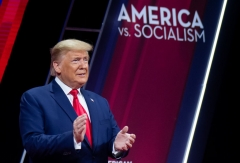 (CNSNews.com) – Sen. Bill Cassidy (R-La.) predicted Sunday that former President Donald Trump won’t be the Republican presidential nominee in 2024 even if he runs again, and the senator pointed to the GOP losing the House, Senate and the White House over the past four years as proof.

As far as whether Trump should have a role in the Republican Party moving forward, Cassidy said, “Let me put it this way. We have got to win in two years. We have got to win in four years. If we do that, we will do that by speaking to those issues that are important to the American people, and there's a lot of issues important to them right now, not by putting one person on a pedestal and making that one person our focal point.

“If we do that, if we speak to those issues, to those families, to those individuals, we win. That's where our focus should be,” the senator said in an interview with CNN’s “State of the Union.

When asked whether the GOP can move forward in the direction that Cassidy was talking about with Trump still in the spotlight, he said, “First, CPAC is not the entirety of the Republican Party. That's number one. Number two, political organizations and campaigns are about winning. Over the last four years, we lost the House of Representatives, the Senate and the presidency.

“No president -- that has not happened in a single four years under a president since Herbert Hoover. Now, if we plan to win in 2022 and 2024, we have to listen to the voters, not just those who really like President Trump, but also those who perhaps are less sure. If we do, if we speak to the voters who are less sure who went from President Trump to President Biden, we win. If we don't, we lose. That is a reality that we have to confront,” Cassidy said.

As to whether he thinks the Republican Party should try to sideline or ignore Trump in order to achieve what Cassidy described and whether Trump is at fault for losing the White House and the Congress, the senator said, “If you're going to win in 2022 and 2024, you have got to speak to voters who didn't vote for us last time.

“Now, our policies are great. Before the COVID crisis hit, we had record employment for every group - Hispanics, African-Americans, women, the disabled, high school dropouts, veterans, you name it. We had economic policies that were working. So, if that's the case, and we can speak to those policies, to those families, then we will win, but if we idolize one person, we will lose, and that's kind of clear from the last election,” he said.

When asked whether Trump is fit to be president again, Cassidy said, “I don't think Donald Trump -- one, he will be 78 years old, but I don't think he will be our nominee, for the reasons I have said. Over the last four years, we have lost the House, the Senate and the presidency.

“Political campaigns are about winning. Our agenda does not move forward unless we win. We need a candidate who cannot only win himself or herself, but we also have to have someone who lifts all boats, and that's clearly not happened over the last four years,” the senator said.

Host Dana Bash asked again whether Trump is fit to be president again.

“You're asking me a question for four years from now, which, again, I don't mean to duck, but you could ask a lot of people if they're fit. The point is, I don't think he is going to be our nominee, for the reasons I just described,” Cassidy said.