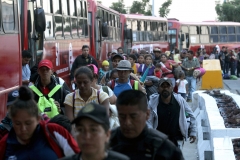 Central American migrants -mostly Hondurans- moving in a caravan towards the United States, board buses to head to a shelter in the outskirts of Zapotlanejo, Jalisco state, Mexico, on November 11, 2018. (Photo by ULISES RUIZ/AFP via Getty Images)

(CNSNews.com) - President Joe Biden plans to sign three executive orders on immigration Tuesday, including one that would allow for illegal immigrants to be vaccinated against COVID-19 as they cross the border.

According to DHS, the agency “and its Federal government partners fully support equal access to the COVID-19 vaccines and vaccine distribution sites for undocumented immigrants. It is a moral and public health imperative to ensure that all individuals residing in the United States have access to the vaccine. DHS encourages all individuals, regardless of immigration status, to receive the COVID-19 vaccine once eligible under local distribution guidelines.”

Rep. Steve Scalise (R-La.) told Fox News’s “America’s Newsroom” on Tuesday that Biden wants to allow illegals to “jump ahead of other Americans” who are waiting to get vaccinated.

“First of all, think about this. In President Biden's first week and a half, two weeks in office, we've seen millions potentially of jobs in America destroyed, but now you are looking at his latest plan on the vaccine. He inherited a great plan from President Trump through Operation Warp Speed where we’re gonna be vaccinating 100 million Americans in the next 100 days, and what has President Biden done?” Scalise said.

“First we exposed he was trying to prioritize Gitmo terrorists over Americans in getting the vaccine. They pulled back on that after we exposed it. Now he is saying that people who came here illegally can jump ahead of other Americans who have been waiting to get the vaccine on that prioritization,” the congressman said.

“So what is this priority? I thought we were supposed to be looking out for hard-working families. We're trying to get our economies opened. We’re trying to get our schools safely reopened, and you do that by vaccinating everybody who wants to get the vaccine,” Scalise said.

“Clearly not everybody who wants to get it has been able to get that vaccine, and now President Biden’s gonna allow people who come here illegally to get the vaccine before some Americans who have been waiting for months. It's mind-boggling that this is his plan, and by the way, it sets back his 100 day plan because there’s only so much vaccine to go around,” he said.

Host Bill Hemmer asked Scalise what effect Biden’s executive order on oil and gas drilling will have on his home state of Louisiana, where one out of every nine people work in the oil and gas business.

“Bill, it's devastating for the hard-working families in south Louisiana. You go down to Port Fourchon where they service a lot of the deep water drilling in the Gulf of Mexico. These are really good jobs. These are careers for people who have been working in many cases second-, third generation producing American energy,” Scalise said.

“This is something that’s allowed us to lower energy costs. Oh and by the way, our standards are so much better in America than these other countries these jobs will go to. It’s not like nobody’s gonna produce oil. It’s gonna be a gift to countries like Russia, Venezuela, and by the way, carbon emissions are gonna go up, because those countries don't have good standards,” he said.

“We use the money in Louisiana to restore our coast. It’s a big environmental issue, rebuilding land that’s been lost over decades from the levying in the Mississippi River. That money comes from drilling in the Gulf of Mexico. Where’s that gonna go? So there’s a lot of devastating impacts to families and to our environment in south Louisiana, and again you can see the story playing out in so many other states,” the congressman said.

“You just showed in Texas, those families who are going to be just put out on the streets, and John Kerry can fly around on a private jet telling you not to fly on a commercial airliner. Where do you think that jet fuel’s gonna come from? It’s not just gonna go away. They’re not gonna put solar panels on those airplanes,” Scalise said.

“It’s gonna come from foreign countries in many cases who don't even like America and who emit more carbon, so you will increase global emissions and crush American jobs. Explain how that’s prioritizing Americans or the hard-working families who depend on it, the school systems who will lose money because the local communities are not getting that tax revenue. That money’s now going to countries like Russia,” he said.