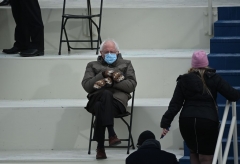 Former presidential candidate, Senator Bernie Sanders (D-Vermont) sits in the bleachers on Capitol Hill before Joe Biden is sworn in as the 46th US President on January 20, 2021, at the US Capitol in Washington, DC. (Photo by BRENDAN SMIALOWSKI/AFP via Getty Images)

(CNSNews.com) - Sen. Bernie Sanders (I-Vt.) indicated Sunday that he’s willing to use reconciliation as soon as possible to push through a stimulus package that may be opposed by Republicans, saying that the GOP used reconciliation to pass “massive tax breaks for the rich” and “as an attempt to repeal the Affordable Care Act.”

In an interview on CNN’s “State of the Union,” co-host Dana Bash pointed out that Sen. Mitt Romney (R-Mass.) said Republicans like him have shown they’re ready to compromise. She asked Sanders whether Democrats should move to pass COVID relief with 51 votes if they can’t get Republican support.

“Well, I don't know what the word compromise means. I know that working families are living today in more economic desperation than since the Great Depression, and if Republicans are willing to work with us to address that crisis, welcome. Let's do it, but what we cannot do is wait weeks and weeks and months and months to go forward,” Sanders said.

“We have got to act now. That is what the American people want. Now, as you know, reconciliation, which is a Senate rule, was used by the Republicans under Trump to pass massive tax breaks for the rich and large corporations. It was used as an attempt to repeal the Affordable Care Act, and what we are saying is, you used it for that. That's fine,” the senator said.

“We're going to use reconciliation -- that is 50 votes in the Senate, plus the vice president -- to pass legislation desperately needed by working families in this country right now. You did it. We're going to do it, but we're going to do it to protect ordinary people, not just the rich and the powerful,” he said.

When asked what the timeline is on that, Sanders said, “As soon as we possibly can.”

“Look, Dana, I know these are crazy times. We have got a new president in. We're dealing with the horrors of this pandemic, which also have got to be addressed immediately. We have not done a good job in producing the amount of vaccine that we need, and certainly getting it into the arms of people,” he said.

When asked if he wants it done before the impeachment trial starts, Sanders said, “We have got to do everything. I mean, this is not -- you don't have the time to sit around weeks on impeachment, and not get vaccines into the arms of people. You don't have time to worry about vaccines and not deal with the fact that children in America are going hungry.

“We have got to break through this old approach that the Senate takes years and years to do anything. We have got a crisis right now. We can chew bubblegum and walk at the same time. The American people are hurting, and they want us to act. That's what our candidates ran for in this election. That's what the guys in Georgia won on, and we have got to reaffirm the faith of the American people in government that we can respond to their pain,” he said.

Bash pointed out that when the GOP used the reconciliation process in 2017 to try to kill Obamacare, Sanders accused them of abusing the process.

“You said, ‘The function of reconciliation is to adjust federal spending and revenue, not to enact major changes in policy,’ but you alluded to this. You are the chairman of the Budget Committee, or going to be. You are already talking about using this tactic for things like paid family and medical leave, for universal pre-K and child care, for climate change, tuition-free college, eliminating student debt and the $15 minimum wage. How is that not what you criticized Republicans for doing?” she asked.

“What we are talking about, by the way, are two separate reconciliation packages, number one, the emergency one right now, get direct checks, get those checks into people's pockets right now, so they can feed their families, and make sure that people are not evicted from their homes, make sure that states have the funds they need to get vaccines into people's arms. That's what we have got to do right now,” Sanders said.

“And then, as soon as that is done, we have to rebuild this economy. Unemployment is much, much too high. Wages are much, much too low. There are structural problems that we have had we have ignored for years. Climate change is a reality, our crumbling infrastructure,” he said.

“And you're OK doing all of that through this process that you criticized Republicans for using? These are major policy changes,” Bash said.

“Well, these are major policy changes, but the devil is in the details, and I criticized Republicans, yes, for using reconciliation to give tax breaks to billionaires, to create a situation where large profitable corporations now pay zero in federal income taxes. Yes, I did criticize them for that, and if they want to criticize me for helping to feed children who are hungry or senior citizens in this country who are isolated and alone and don't have enough food, they can criticize me. I think it's the appropriate step forward,” Sanders said.