Rubio: FBI Should Be Focused on Organized Crime, Terrorism, Drug Traffickers, Not Parents Who Scream Too Loudly at a School Board Hearing 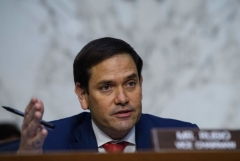 Republican Senator from Florida Marco Rubio speaks during a hearing of the Senate Intelligence Select Committee on the threats to national security from China on Capitol Hill in Washington, DC, on August 4, 2021. (Photo by NICHOLAS KAMM/AFP via Getty Images)

(CNSNews.com) – Sen. Marco Rubio (R-Fla.) said Wednesday that parents who show up at school board meetings to protest critical race theory or mandatory mask mandates are being demonized while left-wing protesters are encouraged by Democrats and the media to harass members of Congress that they disagree with.

As CNSNews.com previously reported, the National School Board Association called on the DOJ to address “the growing number of threats of violence and acts of intimidation occurring across the nation,” citing “more than 20 instances of threats, harassment, disruption, and acts of intimidation that have transpired during school board meetings and that are targeted at school officials.”

“Coupled with attacks against school board members and educators for approving policies for masks to protect the health and safety of students and school employees, many public school officials are also facing physical threats because of propaganda purporting the false inclusion of critical race theory within classroom instruction and curricula,” NSBA said in a letter to President Joe Biden.

“First of all, it's alarming, and second of all, it’s hypocritical. It’s alarming because this idea that somehow if parents show up at a school board to complain, if somebody there decides, well we don't like his tone of voice, we don't like how loud he’s speaking, we don’t like how often he shows up, you can be reported,” Rubio told “Fox News Primetime.”

“The Federal Bureau of Investigation, which should be focused on things like organized crime, things like drug traffickers, things like terrorism and others who seek to harm this country, is now going to divert resources to investigate parents because they scream too loudly or maybe even rude at a school board hearing and hypocritical because let me tell you, there is very few of any senators, certainly people on the right, members of Congress, as well who have not been harassed in their private life,” he said.

“Now, obviously you just interviewed Senator Paul and he’s gone through some pretty extreme situations. But I personally have had people show up at my home when I'm there, when I’m not there. They don't respect that it’s your home, had people there confront my family at my home. We don't make videos out of it but they sometimes do. I don't see a lot of concern,” Rubio said.

“I was here a couple years ago. When the Supreme Court hearings were going on, there were senators being chased into elevators and down the hall, and the way it was covered by a lot of people in the presses, you get what you deserve. You deserve to be run out,” the senator said.

"And, in fact, you had Maxine Waters and others on television basically saying, if you see these people out in public, scream at them, not just be nasty and rude to them, try to intimidate them, so they have normalized this behavior when this comes to left-wing protesters, but then when a parent speaks out about a school board, they want to sick the FBI on them. This is crazy,” he said.

“If you had told me five years ago this was going to happen, I’d say there’s just no way, there’s no way something like this would happen. It's happening,” the senator said.

Host Ben Domenech asked Rubio about the possibility of providing security for every member of Congress – a proposal Rubio said was unrealistic and impractical.

“I think that what is going to happen here is something terrible is going to happen eventually, because we have basically normalized this behavior, and understand, it's hypocritical because the left says, if you’re doing it to someone on the right, they deserve it. If you’re doing it to someone on the left, or someone who comes from their agenda, you should be investigated. I never thought I would live to see the day that this kind of thing would be happening in country, but it is,” he said.