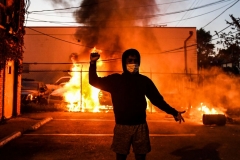 A protestor gestures as cars burn behind him during a demonstration in Minneapolis, Minnesota, on May 29, 2020 over the death of George Floyd, a black man who died after a white policeman kneeled on his neck for several minutes. (Photo by CHANDAN KHANNA/AFP via Getty Images)

(CNSNews.com) - RNC Chairwoman Ronna McDaniel said Thursday that despite House Democrats trying to convince the Senate to convict President Donald Trump of inciting an insurrection by urging his supporters to fight, the word “fight” is commonly used in political speech and that if you showed a clip of every Democrats using that word, “it would go on for hours.”

Trump “also used the word ‘peacefully,’ which many of us know there are peaceful marches and peaceful demonstrations around Washington all the time, so, the fact that he used the word, ‘fight,’ We all use that in our everyday lives. It’s certainly in political speech,” McDaniel told Fox News’s “America Reports.”

“If we did a clip of every Democrat using that word, I imagine it would go on for hours, so I think that is being taken too far, and the American people really are upset right now, because what they do want to see are Democrats fighting to get our kids back in school and fighting to get the vaccine distributed to the American people instead of fighting Donald Trump over and over and over again, which they’ve done for the past four years,” she said.

When asked whether Trump can still remain a political force in the Republican Party if he’s acquitted, McDaniel said, “Well, I think all you have to do is look at 2018, where we lost seats in the House in 2020 where we gained 15 in districts where the president won.

“He was a huge force on the ballot, and there's a reason why people love President Trump. He fought for union jobs. He gave us energy independence. He made sure that we had deregulation, that we had rule of law judges, that he fought for secure borders,” she said.

As to whether the second impeachment would wound Trump to the point that he would no longer be effective, McDanial said, “Oh, I think people move on. I think we saw that with the impeachment that happened a year ago that wasn't a factor in the last election. Most people are looking at this as a partisan act,” McDaniel said.

“The president’s not in office any longer, and the Democrats continue to push this narrative forward, that they’re going to go after Donald Trump time and time again, and my gosh, isn't it time we start working for the American people? I tell you what, I’d like my kids back in school. I’m sick of virtual school. This is damaging our kids and their education, and again, the Democrats aren’t fighting for the American people, and we’re going to see that be more of an impact in 2022 then what’s happening right now,” she said.

McDaniel said that Trump’s legal team will have their act together on Friday.

“We were all moved. Nobody across the political spectrum condones what happened in the Capitol on January 6. The people that attacked our Capitol desire to be arrested and prosecuted, and the president agrees with that. I agree with that, and anarchists do not represent the Republican Party,” the RNC chairwoman said.

“We are all disgusted by that action, but going forward, the president gets his chance to make his case as to why this shouldn't happen, and certainly being out of office, the primary thing of impeachment is to remove somebody from office. He’s already not there. So why are we going through this partisan witch hunt that the Democrats have had against him since day one of him being elected where they were already calling for impeachment four years ago?” she said.

McDaniel said she doesn’t see there being more than the five Republican senators projected to vote for Trump’s conviction.

“I don't see there being more. Based on what I’ve watched and certainly based on the constitutionality, I don't think that changed at all. Everybody condemns what happened on January 6, but I think a lot of Republicans agree that this is not something that’s constitutional or good for our country, and that should be continuing,” she said.

The chairwoman refused to talk about her conversations with Trump, but she said she has talked to him since he left Washington, D.C.

“I'm not going to talk about my conversations with the president. Of course, I have talked to him since he’s left Washington, but I think you just heard from his attorney that he’s upbeat. I think he wants to see this get over with and move forward with the business of the American people,” McDaniel said.

“Everyday we’re focusing on this means the American people are being delayed getting a vaccine, getting their kids in school. Jobs are being delayed and their creation. This is not good for our country, and Joe Biden, shame on you for allowing this to happen,” she said.

When asked whether she agrees with Sen. Rand Paul (R-Ky.) that one-third of Republicans will leave the GOP if Republican senators voted to convict Trump and if the leadership votes for impeachment, it will destroy the party, McDaniel said, “I think there would be a lot of anger in our party because they recognize that Democrats have never worked with Republicans the past four years.

“There has not been a minute that there has been unity behind Republicans or President Trump not been a minute of them trying to work with them. They have attacked Republicans, even to the point of saying, get in their faces, destruct them where they work, attack them at restaurants when they’re eating, go to their homes and attack them,” she said.

“This has been four years of Democrats doing this, and I think Republicans are saying enough is enough. Republicans do not go along with what the Democrats continue to do to divide our country. We need to unite around helping the American people, not play into their hands,” the chairwoman said.