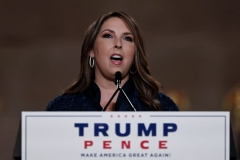 Republican National Committee Chair Ronna McDaniel speaks during the first day of the Republican convention at the Mellon auditorium on August 24, 2020 in Washington, DC. (Photo by OLIVIER DOULIERY/AFP via Getty Images)

(CNSNews.com) – RNC Chairwoman Ronna McDaniel told CBS’s “Face the Nation” on Sunday that Democratic presidential nominee Joe Biden is “running on the biggest power grab in history,” but instead of holding Biden’s feet to the fire on whether he plans to end the filibuster and stack the Supreme Court, host Margaret Brennan is worried about the Trump campaign’s fundraising protocols.

“There's a candidate for president right now doing an absolute personal power grab. No, Joe Biden is running on the biggest power grab in history, and you guys want to talk about fund-raising protocols?” McDaniel said.

McDaniel said that Biden has been a D.C. politician for 47 years, yet he “isn’t getting tough questions from the media.”

“He's refusing to answer about whether he's going to pack the Supreme Court, upending a 150 years of our judicial standards, and he's saying I'll tell you after the election. This is egregious that this candidate is getting away with this, and this is what happens when you're wired in D.C.,” she said.

MCDANIEL: Yeah, you know, we're going to do everything we need to do, but let's go back to the issue, Margaret. You have a candidate for president right now--

BRENNAN: You will be--

MCDANIEL: But there's a candidate for president right now--

BRENNAN: I want to ask if the president is going to be doing those in-person fund-raisers.

MCDANIEL: --doing an absolute personal power grab. No, Joe Biden is running on the biggest power grab in history, and you guys want to talk about fund-raising protocols? He is saying he's going to stack--

BRENNAN: I want to ask what the president's doing in the next few days, because you are 23 days from an election.

BRENNAN: Actually, he-- you said the president--

MCDANIEL: We have a Democrat running on the biggest power grab, the absolute biggest power grab in the history of our country and reshaping the United States of America and not answering the question. That's all we should be talking about.

BRENNAN: Okay, so I think you--

MCDANIEL: That's all we should be talking about.

BRENNAN: I think you answered the question of yes assuming-- resuming in-person fund-raisers for the president.

BRENNAN: But let me ask you about voting.

MCDANIEL: Who cares? Who cares if we have fund-raisers when you have a candidate running to upend--

BRENNAN: Because it's the president. I want to know what he's doing. Let's--

MCDANIEL: But he's going to upend checks and balances in the third branch of government. Why are we not--

BRENNAN: Well, he's going to hold rallies in the next few days.

MCDANIEL: This is all the media should be focusing on.