Rep. Waltz: Future U.S. Soldiers Will ‘Have to Fight Their Way Through Our Own Equipment ... to Deal with al Qaeda 3.0’ 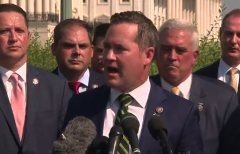 (CNSNews.com) - The U.S. is in a worse position to deal with the Taliban in Afghanistan in the future than they were before 9/1, because the terrorist group is now armed with equipment furnished by the U.S. that was meant for use by the Afghan Army, Rep. Michael Waltz (R-Fla.) warned on Tuesday.

Waltz said that the intelligence community has been clear when they briefed the Biden administration and congressional leaders that “Taliban taking over means Al Qaeda 3.0 comes roaring back. Except now we're in a worse position than we were before 2001.”

“We have no bases in the region,” the congressman said at a House GOP press conference on Afghanistan on Capitol Hill.

“Our local allies are being hunted down as we speak, and as you've heard today, the Taliban are going to be armed to the teeth so that when future American soldiers have to go back in to deal with the problem, and deal with the incompetence of this administration, how many are going to die now, because they’re going to have to fight their way through our own equipment, our own damn equipment, to deal with al Qaeda 3.0,” he said.

“It's unbelievable the lack of leadership. So I 100% agree that blood is and will be on Joe Biden's hands and this Congress will hold him accountable,” the congressman added.

Rep. Mark Green (R-Tenn.) said some GOP lawmakers have personally helped talk people through how to get out of Afghanistan. He also asked who is advising President Joe Biden and questioned whether the president has been “intentionally deceptive.”

There are many people up here who’ve gotten 100, 200, 300 people talked through the wire or across the border out of Afghanistan, so I give you guys a big shout-out. Afghanistan is a beautiful country, if you take the Taliban out of it. The people that I worked with when I was there are amazing.

I served in one of our nation's tier one units doing some pretty amazing things when I was over there. I was there when Pat Tillman was killed. I will never forget for as long as I live that flag-draped coffin going through a cordon of some of our nation's most elite warriors and there wasn't a dry eye.

To those children, those Gold Star children and families, your sacrifice protected America from a terrorist attack for 20 years. What happens from now on is on Joe Biden. Just as my colleagues have said, the blood of Americans are now on his hands. The blood of our allies are now on his hands. My colleagues have said a lot of things. I won't be redundant.

One of the points I want to make, I want to ask is who’s advising this president? Because what the president is saying, we all know it's inaccurate. He said the other day no one advised him not to pull out. We know that's blatantly false. Mark Milley has been saying don't pull out. Add to the force. So who is telling this guy it's okay to pull out? Or is he being intentionally deceptive? Or does he really even know what's going on?

He said the Afghans don't want to leave, remember that in his press conference? There are already 18,000 that had applied, 53,000 family members that had applied. He said the Afghans don't want to fight. Guys, gals who served with these guys they're warriors, aren't they? They want to fight, but when you walk away in the middle of the night in Bagram Airfield and they show up and go hey, where did the Americans go?

You’d think they have a will to fight? Do you think they’re going to get-- feel like they are supported by us? This is the kind of war where they fade into the background in order to survive. Cause Not like me, when I left to go to Afghanistan, my family stayed home. Their family is in the country. They don't want them beheaded.

So they -- when we abandoned them, they pulled back. They want to fight. It’s a lie to say they don't. Who is advising this president or is he being intentionally deceptive? We need to know.

Look, I made multiple trips to Afghanistan during my time on active duty. I walked around that hospital at Bagram, and I saw the consequences of what was going on. I saw the sacrifices that took place. I saw people that would never come home to their families again because they died on foreign soil. I saw people that lost their arms, their legs that paid an incredible price for what was going on.

We betrayed these people now. When I say we, I mean the Biden administration’s betrayed these people. We’ve betrayed all that they worked so hard for. I will speak as a doctor that serves on the armed services committee and doctor that served in the war in Iraq and Afghanistan. I will tell you right now that we need a commander-in-chief. We do not have a commander-in-chief and we’ve not had one from the beginning here.

People say all the time, they’re like, there will be time for finger pointing later. We need to happen next right now, and I agree with that, but you know what? We are at the very beginning of this crisis that Biden has created. He cannot handle it. He is not prepared for this. He is not cognitively fit to be our commander-in-chief right now.

That’s being evidenced every single day more and more. We need him, and we need his team to resign. We need them to let somebody else step up to the plate and lead this operation, somebody with the will and the cognitive ability to make this happen and is competent in doing so. We need a commander-in-chief.