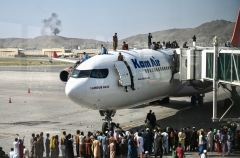 Afghan people climb atop a plane as they wait at the Kabul airport in Kabul on August 16, 2021, after a stunningly swift end to Afghanistan's 20-year war, as thousands of people mobbed the city's airport trying to flee the group's feared hardline brand of Islamist rule. (Photo by WAKIL KOHSAR/AFP via Getty Images)

(CNSNews.com) - Rep. Michael Waltz (R-Fla.) on Wednesday predicted that Afghanistan could rival the 1979 Iran hostage crisis, in which 52 Americans were taken hostage.

“There is just such an ongoing disconnect, Harris, between the happy talk that we're seeing out of the White House, from political appointees, from the president himself, from Kirby, that ‘things are fine and dandy. They may be a little bumpy, but they're going as planned,’ and then what our own staffs and offices are seeing on the ground,” Waltz told Fox News’s “The Faulkner Focus.”

“We had to go operational out of the United States Congress talking to airport managers, gate guards, helping American citizens avoid Taliban checkpoints. Just before coming here one of my team told me that an SIV applicant with visa in hand had their phones taken from them and smashed to the ground by the Taliban and told to turn around,” he said.

“The reason we’re going operational, the reason retired Special Forces officers and intelligence officials are taking matters into their own hands is because it’s not going well because of such a lack of leadership and clarity from this administration that we're having to do whatever it takes to get Americans out and to save those that stood with us,” the congressman said.

“But we're on the cusp, Harris, of having the biggest mass hostage situation in American history. It’s going to make 1979 in Tehran look like a sleepover, because you’re going to have thousands of Americans left behind that the Taliban will then have for leverage when they want international recognition, they want money, they want economic assistance, and they’ve got a gun to the head of American citizens because Joe Biden left them,” Waltz said.

“The Pentagon has been clear to us they could stay and they could get them out. You have to weigh that there’s an ongoing terrorist risk to the folks there, but Americans don't leave Americans behind period,” he said.

Rep. Michael McCaul (R-Texas) said there has been a lot of confusion from the Biden administration, and there needs to be clarity and truth.

“There has been a lack of planning coordination that led to the culmination of what you are seeing on television right now. Right now, the IC warned us all summer long this was going to happen. The White House, politicos and president chose to ignore those dire warnings about what was going to happen. Now it is a mad scramble at the airport,” he said.

“We are getting reports on the ground ourselves because my committee, the Foreign Affairs Committee, is a clearinghouse for thousands of requests for these SIV applicants, for American citizens, and now with the president deciding that August 31st is the date where the military will be completely out, I always say there will be blood on his hands,” Waltz said.

“People are going to die as a result of this decision and it is up to Congress now to lead to make sure we get all those Americans trapped in Afghanistan and the interpreters that Michael Waltz worked with out of that country,” the congressman said.