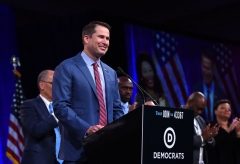 2020 US Democratic Presidential hopeful Representative for Massachusetts' 6th congressional district Seth Moulton announces he is ending his campaign for the President of The United States during the Democratic National Committee's summer meeting in San Francisco, California on August 23, 2019. (Photo by JOSH EDELSON/AFP via Getty Images)

(CNSNews.com) – Rep. Seth Moulton (D-Mass.) told MSNBC’s “Weekends with Alex Witt” on Sunday that despite Rep. Abigail Spanberger’s (D-Va.) complaint last week that the Democratic Party’s push to defund the police and embrace socialism cost them House seats, he didn’t run on socialism, but he was “tarred with it” by his Republican opponent.

Host Alex Witt played a clip of Rep. James Clyburn’s (D-S.C.) claiming that Jamie Harrison lost his Senate race against incumbent Sen. Lindsey Graham (R-S.C.) because of the defund the police movement. Then Witt played a clip of Rep. Alexandria Ocasio-Cortez (D-N.Y.) saying that Democrats have to work very hard to secure the majority in the Senate.

“Jim Clyburn is a very wise man, and I suspect that he is right here, and he sure he understands what is going on in South Carolina, but AOC has a point as well here in that we do need to improve our operations to simply withstand these ridiculous Republican attacks, because I certainly didn't run on socialism - very far from it - and yet that’s what I was tarred by -- tarred with by my Republican opponent,” said Moulton.

“I'm reminded of a World War II veteran who came up to me a few years and said, Seth, if you win this election – this was my first campaign -  promise me you’ll go to Washington as an American, not as a Republican or a Democrat, but as an American,” Moulton said.

“Now look Alex, there’s no time when I’ve been prouder to be a Democrat than in this moment, but we have to come together to governor as Americans, to put our country first and actually find enough common ground to get things done for an American public that desperately needs us to accomplish a lot of things, and let's call a spade a spade here,” he said.

“And it’s going to take a lot of unity among Democrats to make sure that we can push through that roadblock to do the good work that the American people need us to do,” he added.

Moulton said he doesn’t plan to challenge House Speaker Nancy Pelosi (D-Calif.) for the speakership as he has in the past.

“No, as I said earlier, this is a moment where we need unity. If there is one thing that Speaker Pelosi is good at it’s keeping our party together. Now no one expected in this election that we would actually lose seats in the House. That’s the uncomfortable reality that we face today, which means that party unity is going to be even more important now than it was last year,” he said.

“I trust Nancy Pelosi to be able to hold our party together, and it is going to be challenging. Of course it’s challenging, but we are the majority party. We're proudly the big tent party. That means we have the majority of views under that tent, and there will be good debates. That’s healthy. That’s healthy for our party. It’s healthy for the American people. I mean just take health care, for example,” Moulton said.

“All Democrats want to make health care an unalienable right for the American people, but we do have some vigorous debates about how to get there and those debates will continue under the Biden-Harris administration,” the congressman said.

“Nancy Pelosi can hold us together to have those debates in a healthy way but ultimately come together and pass legislation to send to the senate, somehow ram it through Mitch McConnell, and ultimately get it to president Biden's desk. That’s what we need to do on health care, on climate, on coronavirus relief, on strengthening our economy, on modernizing our national security and on so many other issues. I’ll tell you what. I'm excited to get to work,” he said.

Moulton said he “felt a tremendous sense of relief and patriot activism” to see Biden elected.

“America is back to its roots, doing the right thing, and we’ll look back at this era of Donald Trump as an aberration, when we made some mistakes as a country, but ultimately we came together to get things done for the American people, and I know that’s exactly what Joe Biden and Kamala Harris are going to do,” the congressman said.

Witt asked Moulton what are the prospects of bringing people together “after such an energized contest that saw a record number of Americans out there voicing their opinions at the ballot box.” She noted that only about four million votes separated Biden from President Donald Trump.

“There’s no question that this is a divided time for America, and this is a hard task for the next president of the United States, but one thing I always said about Joe Biden is that he is a unifying leader. If there is one person today who can bring together Americans from all other this country, and get us unified to put the country first and do good work for the American people, it is Joe Biden,” Moulton said.

“That’s what he’s done his entire career. We all have disagreements with him. I’ve had disagreements with Vice President Biden myself specifically on some issues of foreign policy, but he will listen. He will listen, and he will find common ground, which is exactly what we need to do in Washington, and it’s exactly what frankly Americans all over the country need to do so we can move forward out this divisive time,” he said.