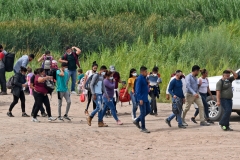 Migrants attempting to cross in to the U.S. from Mexico are detained by U.S. Customs and Border Protection at the border October 07, 2021 in San Luis, Arizona. (Photo by Nick Ut/Getty Images)

(CNSNews.com) – The Biden administration is preparing to restart former President Donald Trump’s Remain in Mexico policy, formerly called Migrant Protection Protocol, which forces migrants to apply for asylum while they wait in Mexico, to comply with a District court’s ruling in August.

However, the Biden administration said it can only move forward if Mexico agrees.

Rep. Chip Roy (R-Texas) told Fox Business’ “Mornings with Maria Bartiromo” on Friday that he thinks the administration will “slow walk” complying with the law.

“The Texas situation is this federal judge, who’s actually a law school classmate of mine – Matt Kacsmaryk – said that the federal government needed to do its job and follow the law and actually continue to follow the Migrant Protection Protocols. The administration is actually working actively to undermine that,” Roy said.

“At the current moment, they’re actually trying to rescind the program by following the procedures the judge cited that they failed to follow to start with. Meanwhile, they’re putting out news that, ‘Well we're doing what the judge said so we’re going to do the Migrant Protection Protocol,’ but they’re really not. They’re actually just trying to slow walk it until they find a way to kill it, because they have no interest in securing the border,” he said.

“Meanwhile, as I sit here in Austin, Texas, going up I-35, a little girl’s going to get sold into the sex trafficking trade today. Someone’s going to die of opioid poisoning from Fentanyl because of 10,500 pounds of fentanyl we apprehended in the last year – an extraordinary number. We’re going to have ranchers lose their livestock with fences getting cut,” the congressman said.

“We’re going to have migrants dying on ranches filling up body trailers in south Texas. This administration doesn't care. They don’t care that your famiiy members are gonna die because they think they’re taking a Xanax and they die from fentanyl, and they don’t care what this means to people of Texas. I’m glad Governor Abbott is pushing back, but we’re going to have to push back even harder,” Roy added.

When asked to address the national security issue as it applies to the border, the congressman said that “the American people just don't know what’s actually happening -- whether it’s what I said before about people dying from fentanyl or little girls getting sold into sex trafficking trade or maybe they would be concerned about the 112 Chinese nationals that were stopped crossing between Reynoso and McAllen alone in the last year,” he said.

“Maybe they’d be concerned about the at least seven that we know we apprehended from state sponsors of terror,” the congressman said.

“Maybe they’d be concerned about running into large groups of people coming in from Yemen or from other places around the world if they actually knew the data and the facts or if this administration actually cared about presenting or sharing that information and we didn’t have to go seek it out and get leaks from people that are friends in Border Patrol to find the truth, because they won’t answer our questions because they know—this administration knows that their policies are purposely failing to faithfully execute the laws of the United States to they can go out and pat themselves on the back in the false name of compassion,” he said.

“Meanwhile, we’re in danger and people are dying in the United States, and importantly, migrants are dying -- 98 dead bodies in Brooks County, Texas, filling up body trailers. That’s your Democratic Party risking us and risking migrants,” Roy added.