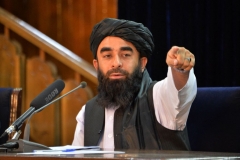 Taliban spokesperson Zabihullah Mujahid gestures during a press conference in Kabul on August 24, 2021 after the Taliban stunning takeover of Afghanistan. (Photo by HOSHANG HASHIMI/AFP via Getty Images)

(CNSNews.com) - Rep. Ronnie Jackson (R-Texas) said Wednesday that the Taliban does not care about the incentives that the United States is using to try to keep them in check like getting their economy restarted, keeping the airports open and bringing in humanitarian aid, because their only goal is to kill Americans.

Jackson also said that the State Department tried to take credit for the congressman’s efforts to get out four Americans from Afghanistan on the ground.

As CNSNews.com previously reported, Jackson was centrally involved in a two-week bid to rescue four family members from his congressional district, which was described as “the first successful ground evacuation since the U.S. left Kabul.”

“The State Department is going to have to do something. They really are. I had four--- Those four citizens that crossed the border a couple of days ago were citizens from my district in Amarillo, Texas. The State Department did nothing to facilitate their departure,” the congressman  told Fox News’s “America’s Newsroom.”

“They tried for two weeks, tried everything they could to get out, and eventually we had a group on the ground take them and get them to the border and they crossed the border. The State Department wasn't tracking anything going on with them, and they didn't help at all. They got them tourist visas after they got across the border,” Jackson said.

“The thing that really angered me the most was that the State Department started taking credit for that and they actually put out that this was evidence that they had a plan in place and that they were going to get Americans out. They don't have a plan in place. They didn't have anything to do with this particular incident, and I don't think they have anything in place right now. We still have lots of people that need to get out,” he said.

Jackson said that his constituents went to the airport in Kabul “three days in a row and tried to get on those planes.”

Secretary of State Antony Blinken “keeps saying they are facilitating charter flights getting out,” Jackson said. “Where are they? Not a single one has left. Those six planes that were on the tarmac three days ago are sitting on the tarmac. There are American citizens with passports that want on those planes that can't get out of there. The State Department isn't doing their job.”

Host Bill Hemmer said that the State Department’s argument could be that there could be Taliban and other terrorists among the groups of people trying to leave on those charter flights, and more time is needed to more fully vet them.

“That's fine,” Jackson said. “The State Department is going to have to figure out a way to get people on those planes, get them to another location in a third party country or something so that they can screen them outside of control of the Taliban and then they can decide who can move on in a permanent situation to go somewhere else.

“They can't leave people inside Afghanistan. The Taliban and ISIS are looking for some of these people. My constituents were being hunted in Kabul, and that’s one of the reasons we got them up north and got them out there. The Taliban was looking for them. So this is a dangerous situation. They cannot use it as an excuse to keep Americans stranded and held hostage in Afghanistan,” he said.

Host Dana Perino pointed to a Wall Street Journal op-ed that said “The Taliban's appointment days before the 20th anniversary of the terror attack is nothing less than a slap in the face to the U.S. And western allies.”

She asked the congressman how he feels about the Taliban being able to have a big ceremony on the 20th anniversary of 9/11 and form their government.

“They are. We just started over. We cleared the board. We gave them the country back. Let the terrorists take charge of it again. We gave them $85 billion in weapons. We armed them, and we've trained a lot of them, and then we’ve got people coming back from Guantanamo Bay, people that their only lot in life is to destroy the United States,” Jackson said.

“Those are the people that will be in the government of this new Afghan government. They are committed, committed to wiping America off the face of the Earth. That's what we're dealing with now. The State Department keeps telling us they have incentives in place. They gave away every bargaining chip to start with,” the congressman said.

“Now they’re using incentives like their economy up and running, keeping the airport open, humanitarian aid coming in. Those things the Taliban does not care about. They've been living in the mountains for the last 20 years trying to kill us. They don't care about those things. They don't motivate them,” he said.