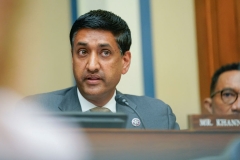 (CNSNews.com) – Rep. Ro Khanna (D-Calif.) is calling on President Joe Biden to stop exporting oil from the Strategic Petroleum Reserve to other countries and to step up domestic oil production in the United States.

Khanna told Fox Business’s “Mornings with Maria Bartiromo” on Thursday that the United States has to bring down gas prices “in the short term.”

There are a couple things we can do. First, we shouldn’t be exporting oil right now. Before 2015 we didn't do that. Why is it that we are supplying the rest of the world, when we don't have enough supply here? Short-term I think we have to increase production, in the United States?” he said.

“The other thing I suggested is that the government should have a floor in guaranteeing a purchase price, and that would actually incentivize short-term oil production, so short term we need to do everything to get the price of gas down,” the congressman said.

Khanna said that even if Biden reversed his executive orders on domestic energy and allowed oil drilling on federal lands, it could take years to have an impact.

So, the actual things that would matter are if we were to ban them making these profits by selling the oil around the world, if we were to provide-- if government could buy this at the dips, the oil-- like Warren Buffett is doing and sell it back to the American people, at a subsidized price, we could tax the wind full profits.

You probably don't agree with that, and put $300 bucks back in the pockets of ordinary Americans. So my view is what can we do to help working families lower prices? Working families are getting stuck with the bill right now, inflation is at 40-year highs, and 8 in 10 Democrats say a that the nation is headed in the wrong direction, are you one of those?

Well, look, things are not going well right now I mean, the stock market is down. Food prices are up. Gas prices up. That’s reality, and the question is what can we do about it? I believe that the Democratic Party can have a bold vision for the working class, by things like I’ve suggested, ban the exports, make sure that we’re returning money to the pockets of people who are having these higher gas bills.

The other thing we ought to do is pass finally this Bipartisan Innovation Act. I was talking to the mayor of New Castle, Indiana. We’ve got pickup trucks lined up, all fully manufactured, lying in vacant lots, because we don't have a semiconductor chip to put in them.

Khanna said that “it is complete malpractice on both parties” if Congress doesn’t pass the United States Innovation and Competition Act of 2021, which would expand semiconductor manufacturing in the United States, and get it to the president’s desk.

“We made a colossal mistake by shipping American production offshore for the last 40 years in semiconductors and so many other industries. I don't know why we thought it would be good idea to let other nations do the production that has hurt our economy. You know. So, yes, we need to pass the bill,” he said.