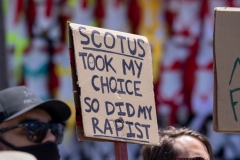 (CNSNews.com) – Rep. Nancy Mace (R-S.C.) said Sunday that a majority of Americans – “whether they’re pro-choice or pro-life” – want “guardrails” on abortion so that abortion is allowed in cases of rape, incest, or to protect the life of the mother.

“Well, I think we're seeing it on both sides of the aisle too, the extremities of both sides. On the far left you have folks that want abortion for any reason up until birth, and then on the far right we have states that are trying to ensure that no abortion for any reason including rape and incest victims in girls, and that's not okay with the electorate either, and I see it in my own district and my own state,” she told NBC’s “Meet the Press.”

“The vast majority of people here are okay with some guardrails, but they don't want the extremities of either side. And they're seeing states push forward with legislation, like in my state of South Carolina – there's legislation that would ban the word abortion on a website or a website server. There are folks that want to ban women from traveling out of state,” the congresswoman said.

“There are folks, like in my state, that want to ban abortion for women who are victims of rape and girls who are victims of incest, and that's just, you know, both sides have these extremities where the vast majority of people just are not there right now, and there has to be a place for the center on this very emotional issue,” Mace said.

When asked whether it was a mistake to overturn Roe v. Wade, the congresswoman said that she’s “staunchly pro-life,” but she added that “there were issues with Roe.”

Even Justice Ruth Bader Ginsburg had issues constitutionally – the right to privacy versus the right to equal protection under the law. You saw Joe Biden 40 years ago trying to, you know, look at doing away with it as well, and so I think that there are issues with Roe in terms of the constitutionality of it.

The overturning of it now leaves it to the states, state legislatures in particular, but also Congress can have a role here, but the problem that we have today, Chuck, and I know that you see this every single day, are the political divisions, and because this is such an emotional issue, this is a place where we really should be working together.

If you look across the pond, you look at European nations, if you're even allowed to have one, there are gestational limits. In most countries in Europe, you're looking at 12 to 15 weeks there, and there are other, you know, exceptions that we should be looking at.

We should be ensuring that life of the mother in every instance is protected. We should ensure – which is one of the reasons I was one of eight Republicans just a few weeks ago to vote to ensure that women have access to contraceptives – there are some basic things we could be doing that all of us agree on, the vast majority of people agree on, and aren't fringy on either side of the aisle, but that's not what we're doing right now.

When asked how do you legislate moderation when neither side is comfortable with that compromise, Mace said, “I actually don't think it's that difficult when you're looking at it from that perspective too. If you look at it from Congress, from our role, I mean, there can be gestational, reasonable gestational limits for most people. 75% of Americans want some guardrails. They support guardrails on abortion, whether they're pro-choice or pro-life.

“Only 25% are really, you know, on the fringes of either side on this particular issue. So if you look at gestational limits, whether it's 15 weeks or 20 weeks, whether you ensure protection for fetal abnormalities, life of the mother in every instance or certainly rape and incest victims, there are things in there that we can all agree on as Americans, and particularly in a state, whether it's South Carolina or any other state, that's banning abortion all together or trying to, then women's access to contraceptives has got to be a guarantee,” she said.

“We have rural counties in South Carolina without a single OBGYN doctor. How is a woman supposed to get any kind of care — health care, medical care, prenatal care, care for her infant – when those resources don't exist? And so you've got to look at it, I think, from a very, I think, centrist perspective, which is where 75% of America is,” the congresswoman said.

“Put in guardrails that they're comfortable with and let's move forward, and we can do this at the federal level and give some guidance to states or states can do it as well, but we're seeing the extremities, and we're going to continue to until Congress steps in, see extremities on both sides, which is not where the American people are,” Mace said.

“You brought up the OBGYN issue. 15 states right now want to criminalize the doctor, okay – want to make the – basically, if there's a crime committed here, it's not the woman, it would be the doctor. As you know, you already talked about the problem of getting OBGYN into practicing in rural South Carolina,” host Chuck Todd said.

“A lot of these OBGYNs don't want to practice in states with these restrictive laws because they don't know – you know, they have to sit here and wait to declare an emergency to intervene medically. And so they figure, ‘You know what? I'm going to practice medicine in a state that makes the abortion laws safe.’ How do you do this? How do you fix this federally?” he asked.

“It is going to be an issue,” Mace said. “I do think that Congress, because Roe v. Wade was overturned, that we do have an opportunity here to work together to ensure that those things don't take place, and you can do that at the federal level with legislation, but on this particular issue, it's going to take Republicans and Democrats working together to get it in a place where you can do it in a bicameral fashion and a bipartisan fashion and pass legislation.

“And I think you can look at gestational limits that are reasonable for most Americans, but also, you’ve got – and one of my concerns is you've got states that are going to try to ban women from traveling, that don’t – that if you're raped, that you've got to report it to the police,” the congresswoman said.

“Well, I was raped when I was 16, and it took me a week to tell my mother. By that time, any evidence would've been gone, and the violation of a woman's privacy – I can't tell you how traumatic that event was in my life. In my own home state, they want women to be required and mandated to report when they are raped, and I just can't even imagine a world where you’re a girl, a teenage girl who's been raped, to have to report those things,” she said.

“And, you know, ‘Handmaid's Tale’ was not supposed to be a road map, right? This is a place where we can be, we can be in the center. We can protect life, and we can protect where people are on both sides of the aisle, and so it's important to take that perspective, and that's the perspective that Congress should have on everything that we do, but as you know, we're just so divided,” the congresswoman said.

When asked if it’s bad for the Republican Party to become the party of abortion bans, Mace said, “I am staunchly pro-life. I have a 100% pro-life voting record. I do think that it will be an issue in November if we're not moderating ourselves, that we are including exceptions for women who've been raped, for girls who are victims of incest, and certainly in every instance where the life of the mother is at stake.

“And that is a position that I have staked out that's really important to me personally, but that's where the vast majority of women are in my state, and I'm going to continue to fight for those things, but we can't go to the far corners of the right or the far corners of the left because the left wants abortion for any reason up until the birth of the child, which is insane to me and insane to most of America,” she said.

“So somewhere in the middle is where we've got to meet, and I do believe that Congress has a role, and I want to play a part in that role in shaping policy for the future for every American in our country,” the congresswoman said.