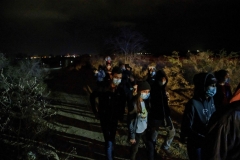 Migrants from Central America, who arrived illegally from Mexico to the US to seek asylum, make their way towards border patrol agents to be documented after arriving on an inflatable boat across the Rio Grande river at the border city of Roma on March 29, 2021. (Photo by ED JONES/AFP via Getty Images)

Speaking to reporters during a congressional visit to the border in Mission, Texas, McClintock said, “I must tell you, in all of my years in the Congress, this is the most disturbing field tour that I've ever taken.”

“Yesterday we watched literally hundreds of illegal migrants crossing the border and turning themselves in to the Border Patrol. Groups in the company of children that were under seven had their basic biometric information taken down and then dispatched to bus stations to continue into the United States,” the congressman said.

“Unaccompanied minors or those who claim to be under 18 are taken into custody by Border Patrol. They’re warehoused in CBP holding facilities. Those are the COVID incubators that you’ve been seeing in the pictures that have been smuggled out from these facilities until they can be transferred to HHS. HHS then makes travel arrangements for them to be sent to their final destination, often a family member who’s already an illegal alien. All are being waved in,” he said.

“Only single adults and groups with older youths are being turned away. That's only because of Title 42, which is effective only during the COVID pandemic. Border Patrol warns that when 42 goes away, our border is completely gone. This is getting worse by the day. One hundred family units illegally crossed the border the week of the election,” McClintock said.

McClintock noted that the Department of Health and Human Services (HHS) issued a memo calling for 60,000 beds in facilities for unaccompanied minors.

“The average stay for a minor we are told is 24 days. That means they're expecting nearly one million unaccompanied minors to enter illegally this year. We're feeding the Mexican crime cartels. The crime cartels are taking in roughly a half a billion dollars a month through this human trafficking made possible by the president's policies,” he said.

“Illegal immigrants often arrive deeply in their debt and in effect become servants. The debts are enforced by threats against family members who remain and the mass importation of young migrants gives these crime cartels a steady stream of new human resources for the gangs. The most chilling words that I have heard in this entire trip was spoken by a Border Patrol agent that reminded us our border is your border,” the congressman said.

McClintock also pointed out that illegal immigrants don’t just stay in towns along the U.S.-Mexico border, and thanks to President Joe Biden, even illegal immigrants who commit crimes won’t be deported, which effectively means the entire nation will be a sanctuary nation.

“These illegal immigrants don't stay and congregate in border towns. They're on their way to communities all across the country. They're guaranteed by the Biden administration not to be deported even if they commit crimes. In fact, under his executive orders, our entire country is now a sanctuary nation,” he said.

“The terrible impact this will have on public safety, local schools, local resources, housing supply, public schools, hospital emergency rooms and the ability of working class Americans to earn a living will be keenly felt in every community in our country unless these policies change. Among his first acts as president, Joe Biden abandoned construction of the border wall,” the congressman said.

“He announced illegal immigrants would not be deported and he ended the remain in Mexico policy for asylum seekers. This sent a powerful message across the third world. Gallup estimates there are 42 million people in Latin America and the Caribbean who want to come to the United States. Now they can, and now they are,” McClintock added.