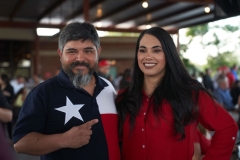 Flores’ was speaking at a Capitol Hill press conference on the Border Patrol suicide rates. As of Dec. 4, 14 Border Patrol agents have committed suicide since January, which is more than any year in over a decade, CBP confirmed to The New York Post.

Her comments also come on the same day that a Border Patrol agent was killed during a speed chase of illegal immigrants in Mission, Texas. The agent was riding on an ATV and crashed into a closed fence at high speed, Fox News reported Wednesday.

“This is an American issue, and I'm asking the Biden administration, I'm asking to please take this issue serious. South Texas needs solutions. How many more lives do we have to lose for this administration to take this border crisis serious? What has been discussed here today, it is not only a statistic. Families are forever changed, but to me it's personal,” Flores said.

“I have lost -- we have lost Border Patrol agents in the recent weeks that are our friends. Just last night, we lost another friend. It has to stop. The Joe Biden administration has played the border crisis. His policies have created, have downplayed it. He’s on record stating there’s other more important things,” the congresswoman said.

“That is a ridiculous statement and it is a disrespect to our border patrol agents. I'm asking him to come to south Texas, to come and see what our Border Patrol agents are going through so we can see some real solutions coming forward. Let's show the American people that we can come together for this. The American people deserve it,” she said.

“I think that is the message that they have sent very clearly in this past elections, that they want us to work together to find real solutions,” Flores added.

“We as Congress, we as the American people, we must ensure that we are providing the necessary resources not only to CBP, but also to our law enforcement agencies across the country who are under severe stress and mental health challenges daily in part due to the failed policies created in this town, in this building behind me,” the congresswoman said.