Rep. Mark Green: ‘What We Need Is a President to Get a Spine and Stand Up to the Taliban’ 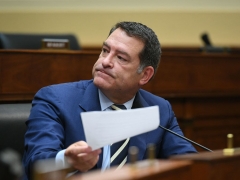 Rep. Mark Green(R-TN) speaks during a House Foreign Affairs Committee hearing on the US -Afghanistan relationship following the military withdrawal on Capitol Hill on May 18, 2021 in Washington, DC. (Photo by MANDEL NGAN/AFP via Getty Images)

(CNSNews.com) - Rep. Mark Green (R-Tenn.) on Tuesday called on President Joe Biden to “stand up to the Taliban,” and he questioned Biden’s cognitive abilities and his ability to lead as commander-in-chief because of his handling of Afghanistan.

Speaking to Fox Business’s “Mornings with Maria Bartiromo,” Green said he agreed with House Intelligence Committee Chairman Adam Schiff (D-Calif.) who said Monday that he thinks it’s “very unlikely” that the U.S. military will be able to evacuate all the Americans and Afghan allies from Afghanistan by the Aug. 31st deadline.

“The DoD is working to make people flow through and get people into this perimeter with the constraints that the Biden administration placed on them, but there's no way that they make the deadline, just not going to happen, and what we need is a president to get a spine and stand up to the Taliban. We can't afford to leave a single American or ally in Afghanistan,” he said.

Host Maria Bartiromo noted that the Taliban warned Biden that he better get U.S. troops out by the 31st of this month or that will provoke a response.

“Well, I think those words should provoke a response from Joe Biden,” Green said. “We are talking about Americans behind enemy lines. What he needs to do is tell the Taliban, if you touch a single American, we will smoke every one of you holding a gun in your hand. That's all it takes. They will stand down.

The congressman said that three times during former President Donald Trump’s administration, Trump stopped the withdrawal and bombed the Taliban back into compliance.

“Three times during the withdrawal under the last president, under President Trump he actually halted the withdrawal, bombed the Taliban. They came back into compliance with the plan, and then he went on. Joe Biden needs a spine, and he needs to do the same thing,” Green said.

Bartiromo said that Biden is “moving to remove Americans’ guns, and yet he just armed a terrorist group beyond their wildest dreams.”

“His State Department was suggesting early on that they wanted to charge Americans to fly back from Afghanistan, but you get a free flight if you come in across our southern border, and that's who these people are. It makes no sense to anyone,” Green said.

The congressman said there are “clearly some lessons learned from the DoD, but the biggest failure” is from the State Department.

“The Intel community told the president that they needed to halt the withdrawal based on the Taliban situation on the ground. They were very clear. We don't need to give them the Bagram Air Force, the base there. Actually, it was Biden who turned around and said, no, I want the number of troops to go to this level, and I think it was around 600,” Green said.

“The military told him, you cannot defend Bagram if you go to 600. He said, basically, I don't care. Do it anyway. So this is Biden and State not getting people out. DoD is, they’re soldiers. They’re executing the orders that the commander-in-chief gave them. We just have a terrible commander in chief,” he said.

Bartiromo said it was extraordinary that Biden closed the Bagram Air Force Base before getting the U.S. civilians out first.

The congressman said that Biden should have left Bagram open so that the U.S. would be able to double the flow of people out of the region and the Taliban would be split in half.

“It is extraordinary. I mean, just think if we had one more base open, that would split the Taliban in half and their ability to concentrate around the perimeter would decrease by half. Our ability to get people inside the perimeter and flow them out would double. The way the president is thinking, it calls to mind where his cognitive abilities really are,” Green said.

“I'm a physician, I'm not his physician, but it's very concerning, and I think, you know, the downstream effects, America's allies, how they view us, the G7 starting to make demands on us, appropriate, we are letting our allies down,” he said.

“It rips my heart out to hear a member of parliament on the floor of the House of Commons calling my president shameful and saying that they can't rely on their greatest friend. It's just unconscionable where we are because of Joe Biden,” the congressman said.

When asked what he thinks of Biden’s fitness to lead and whether people should start talking about invoking the 25th Amendment, Green said, “So that's, of course, a decision for his cabinet under the Constitution, but I mean, there are going to be a lot of people who start going, wait a minute, this makes no sense. How can he possibly come to this decision?

“This is a bipartisan statement. I have Democrat friends who are scratching their head going, we don't know what he's doing. We’re confused. So that begs the question is he fit to lead, and I think he should step down. I've been saying that since the debacle began,” the congressman said.