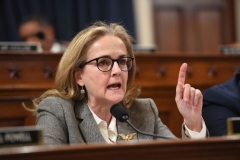 (CNSNews.com) – House impeachment manager Madeleine Dean (D-Pa.) told ABC’s “This Week with George Stephanopolous” on Sunday that it was puzzling to see and hear Senate Minority Leader Mitch McConnell (R-Ky.) say not guilty then minutes later stand and say President Donald Trump “was guilty of everything.”

“It was powerful to hear the 57 guilties and then it was puzzling to hear and see Mitch McConnell stand and say not guilty and then minutes later stand again and say he was guilty of everything. History will remember that statement of speaking out of two sides of his mouth,” she said.

Dean said it was “a solemn honor” to debate the case on the Senate floor, and the House impeachment managers “felt like the gravity of the Constitution was resting on our shoulders.”

“Many have said that the Constitution is a pressure thing, that democracy a precious thing, and it's fragile. So, what we did, and I think we did very well, was we put forward the strongest case based on the evidence and the law, and the responsibility of this president, that the president just absolutely abandoned his oath,” she said.

When asked whether she thinks Trump should face possible criminal charges, the congresswoman said, “I have to admit I'd rather stay in my lane, and the lane that I’m in, I’m very proud that the House impeached this president a second time. We brought forward an article of impeachment. We tried the case with a conviction of believing in our country and our democracy. I’ll leave criminal charges to those who are expert at that.”

“Explain what happened with witnesses. I know you had a long night Friday and early morning Saturday morning trying to decide what to do. You secured the vote to have witnesses and then agreed instead to stipulate that Congresswoman Herrera Beutler's statement could be on the record. Some Democrats say you caved. Your response?” Stephanopolous asked.

“Not at all, and I give a lot of credit to Representative Herrera Beutler for coming forward with that information that revealed the state of mind of this president, that when he's being called, desperate calls to help, to send troops, to send help, to protect the Capitol, and to protect the joint session of Congress, and his own vice president, what was his state of mind? He was more concerned about his so-called big lie and the rigged election,” Dean said.

“So, I give her a lot of credit. We didn't need more witnesses. America witnessed this. We were in a roomful of witnesses and victims. We needed no more witnesses, but what we were able to secure a stipulation by the former president's lawyers that what she had to say was true, it was entered into the record, further witness of the high crime and insurrection incited by a president,” the congresswoman said.

“Minutes later, the president's lawyer denied that on the floor of the Senate,” Stephanopolous said.

Asked whether she believes the House and Senate should pursue a 9/11 style commission on the Capitol riots, the congresswoman said, “Think about it. For the first time in however many years, we had an insurrection incited by the president of the United States where five people died, more have died since, hundreds were injured, people lost fingers, lost eyesight. The House was desecrated.

“The Capitol was desecrated. People were terrorized. This was incited by the president of the United States. Of course there must be a full commission, an impartial commission, not guided by politics but filled with people who would stand up to the courage of their conviction like Dr. Cassidy,” Dean said.