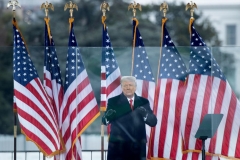 President Donald Trump speaks to supporters from The Ellipse near the White House on January 6, 2021, in Washington, DC. (Photo by BRENDAN SMIALOWSKI/AFP via Getty Images)

“There’s just been--- it’s absolutely intolerable and unacceptable, and the mob will not prevail. We all have taken an oath to the Constitution. It’s an oath that we carry out. It doesn’t bend to mob rule. It doesn’t bend to political threats. It’s an oath under God, and we will carry it out, and what happened today can never happen again in the United States, and the president needs to take responsibility for it,” she said.

Prior to the attack on the U.S. Capitol, Trump called Cheney out as one of the members of Congress who refused to vote against certifying the Electoral College votes for certain disputed states, telling the crowd at the Save America Rally, “And we've got to remember in a year from now, you're going to start working on congress, and we've got to get rid of the weak congresspeople, the ones that aren't any good, the Liz Cheney’s of the world. You know, she never wants a soldier brought home.”

Baier asked Cheney for her thoughts on the president’s tweet, which he posted after the video telling protesters to go home and be peaceful.

The tweet, which was removed by Twitter for violating Twitter’s rules, stated, “These are the things and events that happen when sacred landslide victory is so unceremoniously and viciously stripped away from great patriots who have been badly and unfairly treated for so long. Go home with love and peace. Remember this day forever."

“The Electoral College voted on December 14th, and our job here in the Capitol is to count the votes. We will count the votes, but there are serious questions about the president's involvement and responsibility for what happened here tonight, here today at the Capitol, and it cannot be tolerated,” she added.

Prior to Congress certifying Joe Biden as the next president, the congresswoman said there was bipartisan agreement that Congress will not be “deterred in completing this constitutional path” and that she looked forward to doing that.

“I think it is important for us to do that. It’s important for us to send a message to the nation and to the world that America is not ruled by mob violence. We have this tremendous history as a peaceful transfer of power, something that we take for granted but Ronald Reagan said it was miraculous,” Cheney said.

“I think what we’ve seen today demonstrates how fragile it is, and the obligation and the responsibility of everybody in a position of authority to step up and make sure that we are abiding by our oath and make sure that this insurrection is not allowed to proceed, and that we are not going to be ruled by the violence,” she said.

“I also want to say that you’ve got scores of law enforcement and Capitol police officers who were injured. It is just absolutely unacceptable, and the president's response so far has been completely intolerable and insufficient,” the congresswoman added.