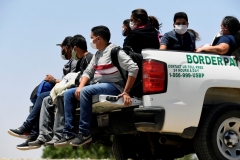 (CNSNews.com) – U.S. Customs and Border Patrol encountered over 180,000 migrants in May 2021, which represents a 675 percent increase compared to May 2020, Rep. John Katko (R-N.Y.) said Thursday at a House Homeland Security Committee hearing on the DHS budget proposal.

“Mr. Secretary, unfortunately, since you were last before the committee, the crisis at the border has not gotten better. In fact, it is trending worse,” Katko said in his opening statement to DHS Secretary Alejandro Mayorkas.

“Just last week, Customs and Border Patrol announced that over 180,000 migrants were encountered along the southwest border in the month of May alone, including 121,000 single adults, over 44,600 family units, and over 14,000 unaccompanied minors. We have also become numb to these numbers, but they continue to be staggering,” the congressman said.

“The 180,000 number represents a 675 percent increase, and let me say that again – 675 percent increase - from May of 2020. Despite these numbers, by eliminating border wall funding, President Biden is allowing cartels, smugglers, criminals, and traffickers to continue exploiting the border, and sadly, neither the president nor the vice president has even bothered to visit the border,” he said.

According to CBP, the agency encountered 180,034 people trying to enter the U.S. along the Southwest border in May 2021. CBP pointed out that it represents a one percent increase compared to the month before. However, according to CBP statistics, there were only 23,237 such encounters in May 2020, which represents a 675 percent increase compared to the same time this year.

Katko accused Biden of failing to prioritize the nation’s “most pressing homeland security threats,” pointing out that his budget request for the Department of Homeland Security does not include money for additional Border Patrol agents. Instead, it includes millions for electric vehicles for the department.

“The president has submitted the largest budget request by far in the history of the United States - $6 trillion. Sadly, if this fiscally irresponsible budget is enacted, our children and our children’s children at a minimum will be paying for it – a burden we should not place on future generations, and despite its high price tag, this budget request is out of touch with reality and more importantly fails to prioritize many of today’s most pressing homeland security threats,” the congressman said.

“To give you a few examples, the Department of Homeland Security’s asking for $78 million electric vehicles but there are no additional appropriations requested for additional Border Patrol agents, and CBP’s net discretionary budget has a reduction of $280 million. Overall, the fiscal year 2022 budget asks for less than half a percent of an increase for three key homeland security law enforcement components: Customs and Border Patrol, ICE, and the Coast Guard,” he said.

“When proposed funding for pay increases is set aside, these three agencies show a decrease from their enacted levels in the FY22 request. On the cyber front, the budget requests a 29 percent increase for the Department of Energy cyber activities, but only a 6 percent increase for CISA,” Katko said, referring to the Cybersecurity and Infrastructure Security Agency.
“The Biden budget simply fails to reflect the priorities that are critical to the defense of the homeland. So I do not envy you having to come before the committee and defend this request on behalf of the administration,” the congressman told Mayorkas.

“I honestly just don’t know how it is possible to spend that much money on a grab bag for far left proposals while somehow neglecting to adequately defend the homeland, particularly given the rash of major cyberattacks we’ve had recently,” he added.

Katko also pointed out that drug seizures are up, and in particular, enough fentanyl has crossed the border this year “to kill every man, woman, and child in the United States” three times over.

“One aspect of this crisis that has been highlighted and truly makes every state a border state is the explosion of illegal drugs that have been streaming across the border. This particularly impacts my district in Central New York and so many other communities across this country,” the congressman said.

“According to Customs and Border Patrol, drug seizures were up 18 percent in May from April of 2021. Methamphetamine seizures were up 53 percent. Heroin seizures were up, and so was fentanyl. There’s enough fentanyl to cross the border this year already to kill every man, woman, and child in the United States. Try and digest that,” he said.

“Customs and Border Patrol continues to see an alarming surge in fentanyl seizures at 56 percent higher … through May of FY 2021 than all of FY ’20. This means that more than 600 pounds of deadly fentanyl was seized every month for the last 12 months, and that is a record,” Katko said.

“In the last six months alone, Border Patrol seized 5,400 pounds of fentanyl, enough lethal doses to kill 1.2 billion people or the entire population of the United States more than three times over,” the congressman said.

He vowed that Republicans on the Homeland Security Committee will continue to press the Biden administration “to reverse its disastrous executive orders” and work with them on “stronger border security measures.”