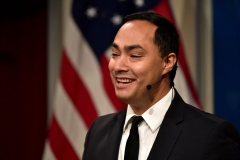 (CNSNews.com) - Rep. Joaquin Castro (D-Texas) on Sunday accused former President Donald Trump’s daughter-in-law Lara Trump of potentially inciting violence for telling Americans along the southern border to arm themselves to deal with the onslaught of illegal immigrants pouring across the border during the Biden administration.

“I don't know what you tell the people that live at the southern border, I guess they better arm up and get guns and be ready and maybe they should start taking matters into their own hands,” Lara Trump told Fox News’s “Justice with Judge Jeanine” on Saturday.

“What do you think of that? She is calling for Americans living on the southern border to arm up,” CNN’s Jim Acosta said, asking for Castro’s reaction.

Speaking to “CNN Newsroom with Jim Acosta,” Castro condemned Lara Trump’s remarks, saying, “That's the kind of dangerous rhetoric that gets people targeted and gets people killed. That's the kind of rhetoric that led to a guy driving 10 hours from Dallas, Texas, to El Paso to murder 23 people, because he considered them Hispanic invaders to Texas.

“Remember, the Trump campaign, of which she was part back then, had purchased about 2,000 Facebook ads basically with that messaging, that these immigrants were invaders to Texas and that they had to be dealt with, and you can see – I don’t know. I think she's running for office,” the congressman said.

“I can’t remember, but you see them essentially putting the same message out there as though they’ve learned nothing. The thing is I doubt she’s even been to the Texas-Mexico border. I doubt that she’s even met the people down there, so it costs her nothing to spew that kind of racist and ugly rhetoric, but it’s actually putting a target on people's backs,” he said.