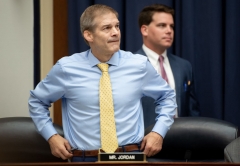 During an interview with Fox Business’s “Mornings with Maria Bartiromo,” Jordan questioned what House Speaker Nancy Pelosi (D-Calif.) knew about Swalwell’s relationship with a Chinese spy when she put him on the House Intelligence Committee.

“What did the speaker of the House know when she selected him put him on the Intel Committee and has kept him on Intel Committee, so you step back for a second. Think about what we’ve learned in just the last week. We learned that oh, in fact Hunter Biden was under investigation by the Justice Department. Over two years ago they started to investigate Hunter Biden,” Jordan said.

“We’ve learned that a member of the Intel Committee, Representative Swalwell was in fact hanging out with a Chinese spy for years, and then we learned the speaker of the House has kept him, put him and kept him on the Intel Committee all in one week, but somehow the big story over the last few years was oh, President Trump was somehow working with the Russians, which we know was a hoax, so, I think the big takeaway from frankly all this is, why won't the press cover the real stories?” he said.

“I mean you know how much time the networks have devoted to the Hunter Biden story in the last week and a half? Twenty-six seconds, and The New York Times has yet to do a story on Eric Swalwell and his relationship with this Chinese spy, so that is a disservice to the American people from the mainstream press. Thank goodness you guys are covering the facts, covering the truth and bringing real stories to the American people,” the congressman said.

Jordan said he didn’t know how many hours it’s been but it’s been over the last four years.

“You go clear back to when we started to figure out this dossier was National Enquirer garbage, when we went through the whole thing when Comey, McCabe, Baker, Strzok, Page were all getting fired, the top people in the FBI were all let go or fired because of their involvement in this crazy situation, when we first got the Page and Strzok text messages and saw the bias against President Trump how they started this ridiculous investigation based on no truth, when Ric Grenell released the transcripts, declassified the transcripts, and we find out Clapper and Brennan and Yates, all these people said, there never was collusion. I never saw anything, but we went ahead and investigated the president and put the country through what they did for 3 1/2 years, so it was 3 1/2, four years we spent on this,” he said.

Jordan said that someone in the media knew about Hunter Biden being under investigation by the DOJ but chose to keep the story to himself.

“And here we are now with the (former) vice president's son involved with this, with the direct eyewitness saying that the (former) vice president was involved with his son's business and not one bit of coverage from the mainstream press, and no one will ever convince me that the press didn't know about this, know about Hunter Biden being under investigation in October. Someone in press knew about it, but yet no one would write the story, and they kept the American people in the dark prior to the election,” he said.

It seems that whatever political party is in power can misuse their power and use investigative agencies at the federal government the way they see fit, Bartiromo said. She pointed out that we have yet to see the Durham report. She asked whether we should expect the Hunter Biden story to just go away and what Jordan planned to do about it.

Jordan pointed out that Congress can’t indict anyone. That’s the Justice Department’s job.

“Two things, Maria. You and I, we can't indict anyone. All we can do is bring the information to the American people, and only the Justice Department can indict people. I hope that they do if in fact there’s sufficient evidence to indict people, hold people accountable, but you are exactly right,” the congressman said.
“Emmet Flood wrote an amazing letter over a year and a half ago when the Mueller report was first coming out, and he said in that letter, ‘We would all do well to remember if they can do it to a president of the United States, imagine what they can do to you and I,’ and that’s the fundamental issue we have to keep in mind as we move forward.,” he said.