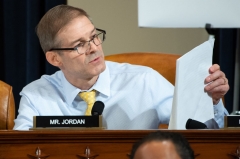 (CNSNews.com) - Rep. Jim Jordan (R-Ohio) spoke on the House floor Wednesday against the second effort to impeach President Donald Trump, pointing out that four years ago, Democrats objected to the Electoral College votes of the 2016 - two of whom are leading the impeachment effort of the president today.

“And guess which state he objected to? Alabama, the very first state called. Alabama. President Trump I think won Alabama by like 80 points. Actually, he won it by 30 points,” the congressman said during debate on the rules of impeachment.

Jordan called out the hypocrisy of the Democrats in condemning Republicans who objected to the results of the 2020 election.

“They can object to Alabama in 2017, but tell us we can’t object to Pennsylvania in 2021? Pennsylvania, where the state Supreme Court just unilaterally extended the election to Friday,” the congressman said.

“Pennsylvania, where the secretary of state unilaterally changed the rules, went around the legislature in an unconstitutional manner. Pennsylvania, where county clerks in some counties, and you can imagine what counties they were, let people fix their ballots against the law, fix and cure their mail-in ballots, direct violation of the law,” he said.

“And they tell us we tried to overturn the election. Guess who the second objector was in 2017? The individual managing the impeachment for the Democrats,” Jordan said, referring to Rep. Jamie Raskin (D-Md.).

The congressman also pointed out that Democrats objected to the Electoral College votes of more states in 2017 than Republicans objected to in 2021.

“Americans are tired of the double standard. They are so tired of it. Democrats object to more states in 2017 than Republicans did last week, but somehow we're wrong,” Jordan said.

“Democrats can raise bail for rioters and looters this summer, but somehow when Republicans condemn all the violence - the violence this summer, the violence last week - somehow we're wrong, and Democrats can investigate the president of the United States as Mr. Hoyer went through, try to impeach him, investigate him for four years but will not look at an election that 80 million Americans - half the electorate - 80 million - Republicans and Democrats - have their doubts about,” he said.

“I said this last night. I do not know where all this goes, and this is frightening for the country. We should defeat this rule, and we should defeat the impeachment resolution when it comes up,” Jordan concluded.

An article published on Jan. 6, 2017, reported, “A challenge by several House Democrats to Donald Trump’s election on Friday collapsed when they failed to persuade a single Democratic senator to join their protest.”

The attempted objections began immediately, when Rep. James McGovern (D-Mass.) protested Alabama’s electoral votes, citing Russian interference in the presidential election. His declaration drew a sharp round of booing from the Republicans in the chamber.

Biden asked whether his objection was in writing and if he had the support of a senator. When McGovern acknowledged he had no senator, Biden quickly moved on.

At times, Democratic objectors attempted to lodge complains over Biden’s attempts to gavel the session along. When Jackson Lee objected to Michigan’s votes, Biden gaveled her silent. But she quickly started speaking again while Biden repeatedly slammed the gavel and Republicans began shouting for “order” in the chamber. The episode was repeated when Jackson Lee objected to South Carolina’s vote.