Rep. Jim Jordan: ‘It Seems Like Democrats Get Defensive Briefings; Republicans Get Set Up’ 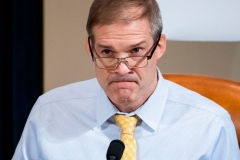 (CNSNews.com) – Rep. Jim Jordan (R-Ohio) said Thursday that the big takeaway from the revelation that Rep. Eric Swalwell (D-Calif.) had a relationship and dealings with a Chinese spy is that Democrats are treated differently than Republicans when it comes to scandals with foreign countries.

“So it seems like Democrats always get the defensive briefing when something like this has gone on. Republicans get set up. I think that’s a question. I think frankly there’s some questions that Speaker Pelosi will have to answer,” he said.

Jordan also called for a special counsel into Hunter Biden’s dealings with China on the heels of reports that the DOJ is investigating President-Elect Joe Biden’s son for alleged tax fraud and money laundering. He also pointed out that Democrats have a double standard when dealing with allegations against President Donald Trump versus how it deals with Democrats.

“There needs to be a special counsel. We need to dig into it. We know he's being investigated, looks like tax issues and everything else, but I think it's interesting,” the congressman said.

“Let's get to the bottom of this. This is important. These folks who accused the president for four years of working with the foreign government, turns out it wasn't him at all. They went after his family. Don Jr. had 30-hour depositions he had to sit through. That wasn't happening at all, but in fact at that same time, looks like the Biden family was doing all right with their engagements with foreign countries,” Jordan said.

“We’ll see. Maybe it's not needed, but I think it makes sense to do it. We called for it—Ken Buck called for it earlier this week. When you have something this serious, again, this came up during impeachment, and the Democrats dismissed it then,” Jordan said.

“Then it came up again with Mr. Bobulinski and all the facts he had, the emails that showed the big guy in fact referred to vice president Biden, and the Democrats and the mainstream press dismissed it then as well. So now we know there’s something real there, even though we knew it back then. Now we know there’s something real. Let's just make sure we get to the truth for the American people,” he said.