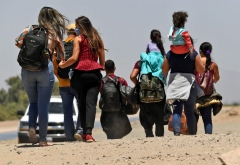 “Even the FBI director in the Biden administration knows how serious this situation is on our border, this chaotic situation. I give my hats off to Tom McClintock, who’s the top Republican on the Immigration Subcommittee of the full Judiciary Committee. Joe Biden won't go to the border. Kamala Harris won't go to the border,” Jordan said.

“When Secretary Mayorkas went to the border, he wouldn't let nobody in, because they don’t want the country to fully understand just how serious this situation is, and what is actually happening to these people, who as Mr. McClintock pointed out, Maria, are being trafficked and then having to send money back to these organized crime, these terrible cartels,” the congressman said.

“This is how crazy it is, and it's all driven by the crazy policies that the Biden administration put in place where they said we’re not deporting anyone, we’re not going to build the wall, and we’re going to get rid of the Remain in Mexico policy, and we get this chaotic situation that we have now seen over the last several months. Each month sets a new record for illegal immigrants coming into our country,” he said.

Jordan said that Democrats on the House Judiciary Committee don’t want a full hearing on the matter, but he would love to have DHS Secretary Alejandro Mayorkas come in and testify.

“The Democrats don’t—they want to put their head in the sand, because the Judiciary Committee is yet to have a full hearing on this. We’re the committee of jurisdiction, yet to have anyone come in. I would love to have Secretary Mayorkas come in and talk to us answer questions. At least he's been to the border. We know the vice president and the president hasn't, but you're exactly right,” he said.

“These cartels, they’re in the drug-moving business, and they’re in the people-moving business, and they are exploiting people as even the FBI director now understands. This is how serious it is and Congress is supposed to do investigations, supposed to do hearings, but the Judiciary Committee under control of Democrats will not do it, and it's terrible. it's wrong. I hope they'll have a change of mind, and we will actually focus on this issue,” the congressman said.