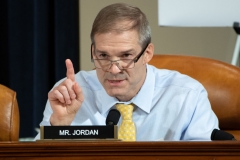 She cited a CNN report that said DHS is “limited in how it can monitor citizens online without justification and is banned from activities like assuming false identities to gain access to private messaging apps used by extremist groups such as the Proud Boys or Oath Keepers.”

Therefore, according to CNN, DHS might partner with non-profit groups that “periodically use covert identities to access private social media groups like Telegram, and others used by domestic extremist groups,” which “thrusts DHS into a potential legal gray area even as it plugs an intelligence gap that critics say contributed to the failure to predict the assault on the Capitol.”

Ingraham said Republicans should demand hearings “and hold all of these people up to scrutiny.”

“You are exactly right, Laura, and put this in context with the couple you had a few minutes ago who the FBI raids their home to then the FBI going after the president's lawyer, raiding his home, and now we have this. Frankly, it should not surprise us,” the congressman said.

“The Obama/Biden administration is the same administration that used the IRS to target people like you and I and all of your viewers. The Obama-Biden administration used the FBI to target President Trump’s campaign, and now they’re looking at ways as you said to spy on all of us. So you are exactly right. We need hearings. Let's see if the Democrats will do it. I don’t think they will, but we are going to be calling for them,” he said.

“There's also been a lull in the system, because they’ve waited to hear what Donald Trump will say. He has been remarkably quiet in the past couple of months, but they’ll either wait for him to sort of give some sort of thoughts about what the direction of their movement should be or they will strike out on their own, and we saw this happen with international terrorism, where you had a number of splinters for example after Osama bin laden died 10 years ago,” Watts said.

Jordan said what the DHS is trying to do is unconstitutional.

“This is ridiculous but that’s how the left views regular Americans who vote Republican and supported President Trump. It is completely ridiculous, but understand, Laura, the story that came out today on this, they talked about people posing as someone else online, so posing as someone else to get your information, have communications with you and then share that information with the government,” Jordan said.

“That is unconstitutional, but it’s what they did in the whole Trump Russia collusion thing when they had Azra Turk pose as someone else and go cozy up to George Papadopoulos. Remember this? This is how this whole thing started with the FBI spying so now they’re taking it online, and coming after regular Americans who happened to vote Republican. This is frightening where they want to go,” he said.

Ingraham said that the Patriot Act is “a never ending resource of supposed federal rights to violate yours.” She pointed out that the federal government is teaming up with Big Tech to track down the Capitol rioters using facial recognition software, and she questioned whether there is “an issue with probable cause being determined by some shoddy facial recognition technology.”