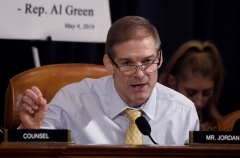 (CNSNews.com) - Rep. Jim Jordan (R-Ohio), ranking member of the House Judiciary Committee, said Wednesday that Big Tech is out to get conservatives, and he ticked off a list of examples from censorship of conservative websites to censorship of the president.

“I’ll just cut to the chase. Big Tech’s out to get conservatives. That’s not a suspicion. That’s not a hunch. That’s a fact. July 20, 2020 - Google removes the home pages of Breitbart and the Daily Caller. Just last night we learned Google has censored Breitbart so much, traffic has declined 99 percent. June 16, 2020 - Google threatens to demonetize and ban The Federalist,” Jordan said.

“April 19, 2020 - Google and YouTube announce a policy censoring the content that conflicts with recommendation of the World Health Organization. Now think about that. The World Health Organization, the organization that lied to us, the organization that shilled for China, and if you contradict something they say--- they can say whatever they want. They can lie for China. They can shill for China. You say something against them, you get censored,” Jordan said.

“June 29, 2020 - Amazon bans President Trump’s account on Twitch after he raises concerns about defunding the police. June 4, 2020 - Amazon bans a book critical of the coronavirus lockdowns written by a conservative commentator. May 27, 2020 - Amazon won’t let you give to the Family Research Council and the Alliance Defense Fund, but you can give to Planned Parenthood,” he said.

Jordan said that Republicans on the committee invited Twitter CEO Jack Dorsey to testify as their guest, but the Democrats blocked it.

And of course, what did Mr. Dorsey tell us? He said, oh it was just a glitch in our algorithm. I asked him what did you put in the algorithm - the names Gaetz, Meadows, Nunes, Jordan? I mean if I had a nickel for every time I heard it was just a glitch, I wouldn’t be as wealthy as our witnesses, but I’d be doing alright. We’ve heard that excuse time and time again.

You can tweet all you want about the autonomous zone that happened in Seattle, but the president tweets that he’s not going to have one in Washington, D.C. Oh, oh, no, no. You can’t do that. You get banned. You get censored. Dozens of examples-- oh, I forgot one. I forgot one. Just last week, July 21st, July 21st - this is what Twitter did. The leader of Iran, the Islamic Republic of Iran, this is from the largest state sponsor of terrorism. Twitter allows this tweet - “The Islamic Republic of Iran will never forget the martyrdom of Soleimani and will definitely strike a reciprocal blow in the United States.

So you can threaten the citizens of this great country, the leader of the largest state sponsor of terrorism. That’s just fine, but oh, the president says he’s not going to allow some autonomous zone in D.C., and he gets, he gets censored. All kinds of examples, most of them from this year, and that’s what’s I think critical for all of us to understand - most of them from this year, an election year.

Jordan noted that most of the examples of censorship of conservatives happened during this election cycle.

“And that’s what concerns me and so many Americans, because we saw what Google did in 2016. We all know about the email the day after the election where top executives at Google, email chain where they talked about the silent donation Google made to the Clinton campaign,” the congressman said.

“Thank goodness it wasn’t enough and in spite of their efforts to help Clinton, President Trump won, but we’re 97 days before an election, and the power as the previous chairman and ranking member have said, the power these companies have to impact what happens during an election, what American citizens get to see prior to their voting is pretty darn important,” he said.

“That’s why this committee hearing is important. Look, we all think the free market’s great. We think competition’s great. We love the fact that these are American companies, but what’s not great is censoring people, censoring conservatives and trying to impact elections, and if it doesn’t end, there has to be consequences. There have to be consequences. That’s what I’m concerned about, and I think so many Americans are concerned about,” Jordan said.