Rep. Jim Jordan: ‘14 FBI Agents Have Come to Our Office as Whistleblowers’ 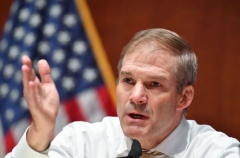 (CNSNews.com) – Rep. Jim Jordan (R-Ohio), the top Republican on the House Judiciary Committee, said Sunday that 14 FBI agents came to his office as whistleblowers in the wake of the FBI raid on former President Donald Trump’s home, “telling us this is baloney what’s going on.”

When asked what the reaction would be if the FBI agent investigating Hunter Biden was as biased against him as former FBI agent Peter Strzok was against Trump, Jordan told Fox News’s “Sunday Night in America with Trey Gowdy” that “there would be no other news that you would see.”

“We all know the answer to that question. We all know wasn't that the response to that rhetorical question, but understand the template here. The template never changes with these guys. The left creates a lie. Big media, mainstream press reports the lie. Big tech amplifies the lie, and then we try to tell the truth they call us names and try to cancel us and tell the world we're the ones not being squared with them,” he said.

“So the country, though the good news is they figured it out, and I’ll tell you who else figured it out, Trey, and you and John, with your background in law enforcement appreciate this,” the congressman said.

Jordan added that “14 FBI agents have come to our office, as whistle-blowers, and they are good people.”

“There are a lots of good people in the FBI. It’s the top that’s the problem, but some of these good agents are coming to us, telling us this is baloney what's going on. The political nature now of the Justice Department. God bless them for doing it, coming talking to us about the school board issue, about a whole host of issues,” the congressman said.

“It’s becoming a well-worn trail of agents who say this has got to stop, and thank goodness for them and that American people recognizes it, and I believe they’re going to make a big change on November 8,” he said.

“I would just throw out the name Kevin Klinesmith. Remember this is the guy who altered evidence way back when, back in ’16 and ’17 when they first started spying on President Trump's campaign, and we know that because of the inspector general. God bless his work,” Jordan said.

“So these are -- sometimes I step back and say, I cannot believe this kind of stuff that is going on in the greatest country ever, and it’s I know it is shocking to us, a concern. Certainly. I heard if from our constituents this past week as I was traveling around the district. They don't know what to believe, they are so nervous and so scared by what they’ve seen,” the congressman said.

When asked whether he sees a difference between the way the DOJ treated former Secretary of State Hillary Clinton versus how it treated former President Donald Trump, former DNI Director John Ratcliffe said, “Well, Trey, I have to imagine you and Jimmy and I were among millions of Americans that were choking back disbelief when Attorney General Garland was talking about how the Department of Justice and FBI were committed to the even-handed application of the law to everyone, including Donald Trump.

“When the FBI and Department of Justice clearly as Jimmy pointed out, they don’t have clean hands on this matter, and You mentioned Jim Comey. You have an FBI director who has admitted that Donald Trump was treated differently under the law than Barack Obama and Democrats,” he said.

“Remember you had an FBI Director Jim Comey who when you talk about disparity of treatment, wrote an exoneration memo two months before he interviewed Hillary Clinton, knowing that Hillary Clinton had dozens of classified, highly sensitive compartmented in information in her possession, before dozens of witnesses, other witnesses were interviewed, and wrote a memo clearing her,” Ratcliffe said.

“That very same FBI Director Jim Comey, on his book tour admitted, I did things to Donald Trump that I never did to Barack Obama or would have tried. So think about that, an FBI director who’s admitting, I applied the law unevenly,” the former DNI director said.

“I applied my authorities unevenly because it was Donald Trump and Republicans, and to that point, that FBI director having cleared Clinton before he ever talked to her, opened an investigation into Donald Trump after, after he has learned that the Russia collusion allegations were actually created by Hillary Clinton and then went so far as to lie to the FISA court and verify a dossier that he knew to be fake to continue spying on the Trump campaign,” he said.

“So the American people see that when it comes to Republicans and particularly Donald Trump that for last 6 years we have an FBI in the Department of Justice that have literally become the enforcement arm of the Democratic Party,” Ratcliffe added.