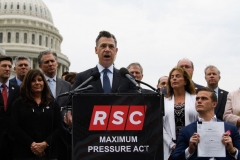 “I notice that Republicans have rightly so focused on the price tag - over $5 trillion in spending between the fake infrastructure bill and the reconciliation bill, and talking about what that will do to inflation, but unfortunately, the bill still polls fairly well among the American people because they don't know exactly what’s in the bill,” Banks told Fox News’s “The Faulkner Focus.”

So a Republican Study Committee - the group that I chair - we found as you said 42 reasons - each of them alone are good reasons to vote against this massive bill to turn our country into a socialistist nation overnight, but when you dig into it, you find things like billions of dollars to fix what they call racist roads and bridges, which is crazy. I don't know what that means.

Creating a climate police department or a militia to go out and enforce the green new deal policies at the federal level. Not just giving free college education to illegal immigrants but giving them child tax credits as well to those who come here illegally.

This bill will shut down your daycare because daycares will now will have to hire college educated employees, so you probably won’t be able to afford the daycare they go to or will have shut down altogether, and then on top of that $700,000 first time fines for your employer if they don't abide by the Biden vaccination mandates.

So each and every one of these reasons alone are reasons to vote against it, but overall, it’s just a dangerous bill.

Banks said that Biden’s vaccine mandate will actually put employers out of business if they don’t comply, even though the mandate is unconstitutional. He said that “it’s something we should be fighting against in the courts and in Congress.”

“So your business will probably go out of business, and you won’t be able to afford your child's daycare if this bill passes,” the congressman said.