Rep. Hakeem Jeffries: ‘The President Made the Right Decision’ 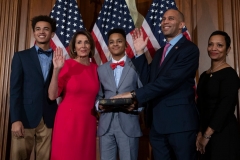 (CNSNews.com) – Rep. Hakeem Jeffries (D-N.Y.), chair of the House Democratic Caucus, commended everyone except President Donald Trump initially for the mission to capture ISIS leader Abu Bakr al-Baghdad, and when pressed by NBC’s Chuck Todd, admitted that “the president made the right decision” to greenlight the mission.

“I'm pleased that it's been completed in a very substantial way, and that they have returned home safely, and no American lives have been lost,” he added.

Asked whether he was pleased that Trump greenlit the mission, Jeffries said, “It was certainly an appropriate mission to greenlight, and so in that regard the president made the right decision. Now we need him to continue to make appropriate decisions moving forward.”

When asked to explain what that means, Jeffries said, “The war -- well the war on terror continues, and we can't cede American leadership in the Middle East which remains a dangerous part of the world to entities like Russia or Turkey or Syria and Iran.”

“What does that mean? When you – it's interesting you use the phrase, the war on terror continues. You don’t -- I take it you don't approve of the shrinking of the American footprint in Syria?” Todd asked.

Jeffries said Trump’s decision to withdraw U.S. troops from Syria was “an erratic decision that has been widely condemned.”

“Just this week, Chuck, as you know, the House in a strongly bipartisan way denounced the decision by President Trump to abandon our allies, the Kurds, in Northern Syria. Individuals who have fought with us closely, who have died fighting on behalf of their land and behalf of the safety and security of the American people,” he said.

“That was an inappropriate decision, and in terms of international relations, our credibility is the ultimate currency that we have, and so betraying our allies is wrong. It has consequences, and hopefully, we'll see a continuing American presence as appropriate moving forward, because we know that ISIS will still try to reconstitute itself, notwithstanding the death of its top leader,” Jeffries said.

“Does this at all though make you feel better about the idea of shrinking footprints but having the smaller -- the president seemed to describe perhaps our military being stationed more in Iraq - and then being able to do these sort of precision strikes when necessary, and is that a model for Afghanistan?” Todd asked.

“Well, certainly I think a smaller, strategic force is the ultimate objective. We have been involved in the Middle East now, particularly Afghanistan, for the better part of 18 years, and I think the American people in a broadly bipartisan way understand the need to withdraw and extract ourselves from that situation, but it has to be done in a responsible fashion,” Jeffries said.