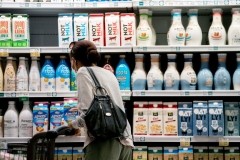 A shopper walks through a grocery store in Washington, DC, on June 14, 2022. (Photo by STEFANI REYNOLDS/AFP via Getty Images)

(CNSNews.com) - Rep. Greg Murphy (R-N.C.) predicted Thursday that the United States will see “massive” increases in food prices in the late summer and fall because of rising fuel prices but also because of the fertilizer shortage among other things.

During an interview with Fox Business’s “Mornings with Maria Bartiromo,” he said that states who are giving out stimulus checks are adding to inflation.

“It is a very well-known economic fact. Even Democratic economists, especially those with the Obama administration have recognized that this out-of-control spending fuels inflation. I don’t know who Biden is using as economic advisories and what wand he thinks he can wave to make prices go lower all of a sudden,” the congressman said.

“That’s just not how the market economy works, and even Jeff Bezos said it’s either misdirection or total uncomprehension of how economies work, and so he’s done so many things now to stoke the fuels of inflation and then trying to magically blame the Republicans. This isn’t President Biden. It’s ‘President Blaming,’” Murphy said.

“He just blames everybody else for his own consequences of his own actions, and so yes, it’s going to continue to fuel inflation, and Maria, as things go on, and as we get now, the late summer and fall, we are going to start seeing a massive increase in food prices, because of the fuel issue but because of so many things with fertilizer, pot ash, and so many other things from China,” he said.

“So the inflation rate can go much higher. At the very least it is here to stay quite a while,” the congressman added.

Murphy said that Democrats running for office are hesitant to appear in public with President Biden, which is “a recognition that the Biden administration is a total and absolute failure.”

“I mean we saw the poll numbers that came out of the Monmouth poll that said 88 percent, a new record of Americans, do not feel that this country is going in the right direction, and he’s making Jimmy Carter look like a stellar president,” the congressman said.

“So yeah, I understand it, from a political sense why Democrats would want nothing to do with Biden, because it just–- you wake up everyday, Maria, everyday, and there is something new and crazy that this administration has done, but it’s simply beyond belief,” Murphy said.

“It is just total tone-deafness, and they’re single mindedly trying to destroy this country, and they are doing a very, very good job of that. This is not the America that World War II veterans died for,” the congressman said.

He said that it was a mistake for Biden to send oil from the Strategic Petroleum Reserves to other countries, adding that some of it has made its way to China.

“I can't comprehend why he would do that. I simply cannot. When you have Americans hurting so much, and here we are exporting oil, our own strategic, again keyword strategic reserves, to other countries, and yes some did make its way to China. How do you explain that? How can you comprehend that?” Murphy said.

The congressman said that Biden’s gaffes are a national security issue.

“Yes, it is, and it has been since day one, I mean you saw the card the other day that told him exactly how to act, what to do, what to say, and he comes up with his roll of reporters that he’s supposed to call on,” he said.

“This is the most orchestrated presidency in the history of this country. As long as he stays on key, I think some of his handlers have things okay, but as soon as he steps off who knows what he is going to say or what he is thinking. It is a strategic problem,” Murphy said.