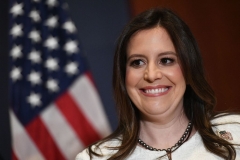 Representative Elise Stefanik (R-NY) looks on after House Republicans voted for her as their conference chairperson at the US Capitol in Washington, DC on May 14, 2021. (Photo by MANDEL NGAN/AFP via Getty Images)

The congresswoman said the GOP is united, despite what the media says.

“Republicans are unified to expose radical agenda of Joe Biden and Speaker Pelosi. We want to focus every day on exposing the border crisis and the national security crisis in the Middle East because it's having an impact on everyday Americans lives,” Stefanik said.

“Our focus is on safely reopening the economy, getting people back to work rather than the incentive being to stay out of work. We have the highest gas prices under Joe Biden in over seven years, so we have a unified message that resonates with the American people across the country. Republicans are unified despite what the media will tell you,” she said.

Cheney “is looking backwards. Republicans are looking forward. We are unified, and we are talking about conservative principles. President Trump is an important voice in the Republican Party. We are working as one team, and voters across America certainly voters in my district in upstate New York,” the congresswoman said.

“We believe that President Trump's results whether it was the economic growth, whether it was the historic accords in the Middle East, whether it was being tough on China or the bipartisan coronavirus relief packages, these were significant results that helped everyday Americans. We are focused on moving forward but also the stakes are so high,” Stefanik said.

“Look at how radical Joe Biden and Nancy Pelosi's policies have been. Joe Biden promised bipartisanship. We have get to see any bipartisan legislation coming out of the oval office or the house. So I'm proud to represent the vast majority of Republicans and that's why we needed to make a change of house conference chair,” she added.