Rep. Doug Collins to NYC Mayor, AOC: Go Out and Do The Police Department’s Job 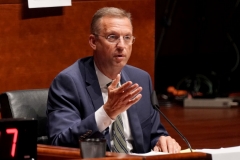 (CNSNews.com) - Rep. Doug Collins (R-Ga.) told Fox News’ “America’s Newsroom” on Friday that Democrats who don’t like how the police operate should accompany the police while they’re out on patrol “or shut up.”

When asked what he thinks when he sees police under attack in New York CIty and other cities, Collins said he’s “disgusted, and as the son of a state trooper down here, who’s someone who’s been in law enforcement all my life and around it, it really makes me just furious to see these mayors and see these governors you know, whether it’s from defund the police or to whole new laws to restrict them and not letting them do their job.”

The congressman addressed New York City Mayor Bill de Blasio and Rep. Alexandria Ocasio-Cortez (D-N.Y.), “any of these legislators” and “all of these governors,” saying,”if they don't like what the police are doing, then get themselves into a police car. Go out and do their job.

“Ride with these folks instead of talking to them, and if they want to get out there and do the job, and when you saw a New York City police officer choked the other night while everybody was laughing and taking pictures and the mayor did nothing, then they need to get into these cars, do the job and make a difference, or shut up,” Collins said.

“I'm just tired of these politicians saying what police can do when they won’t let their executive detail go, so their protection’s there, but they won't do the job,” the congressman said.

Collins said that violent protesters feel emboldened to attack the police because of elected officials “who blame police first and say that everything else just ought to fall in line.”

“That’s not the way civil society works,” the congressman said.

“We need to start standing up for law and order and doing so in a way that respects everyone’s individual rights. This is not about coming in and shutting down a city and being an oppressive law enforcement environment, but we have to have a community that actually has law enforcement, people that do their job, and they do it right,” he said.

Collins said that “99.9% of all of these police officers do it right, and they need to continue to.”

“We need to get the bad ones out, but then communities have to understand what their role is in being part of a civil society. I think what is happening here, and the reason that they are feeling that there’s license to do it is this is what you see in these cities, in New York, in Portland, in Seattle, in Atlanta and others,” the congressman said.

“When you have mayors and you have elected members of Congress even who blame police first and say that everything else just ought to fall in line, that’s not the way civil society works. That's why you see what you are seeing, and it’s got to stop. People do not need to feel unsafe in their communities,” he said.

On the subject of mandating masks during the COVID-19 pandemic, Collins said that “private enterprises” can mandate mask-wearing, “and that’s where it needs to start.” He said that Georgia Gov. Brain Kemp has told people to wear masks and encouraged it through is own example of wearing a mask.

As CNSNews.com reported, Kemp has filed a lawsuit against the city of Atlanta and Atlanta Mayor Keisha Lance Bottoms for mandating mask-wearing.

The congressman accused Bottoms of “auditioning for vice president.”

“Talk about a waste of taxpayer dollars, why doesn’t she get involved with her Atlanta police department against a Fulton County D.A. who has actually charged police officers without a grand jury investigation, without actually having the Georgia Bureau of Investigations finish theirs,” Collins said, referring to the two police officers charged in Rayshard Brooks’ death.

“This is not about people not wearing masks,” Collins said. “This is about people being responsible and safe. I would ask the mayor, how are you going to enforce this, Mayor? You have a police department right now that’s struggling to maintain law and order, and you’re wanting them to go around and check people’s masks? Let private enterprise, let people use common sense, and that’s how we come out of this.”